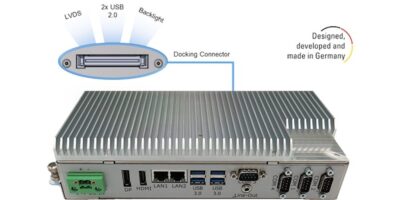 Equipped with a docking connector for LVDS displays with PCAP touch and webcam, the BoxPC Pro 7300 has been released by Distec. The fanless embedded box PC is based on the long-term available Intel Core i5-7300U processor of the 7th generation.

The docking connector offers three interfaces in one connection – LVDS with backlight and two USB 2.0 ports, explained Thomas Schrefel, product manager, Embedded at Distec. “This allows the simultaneous use of an LVDS display with backlight, PCAP touch and webcam applications,” he added. The Embedded box PC offers high computing performance and works reliably even in continuous operation with 9.0 to 24V DC, says the company. It is suitable for industrial applications in demanding environments, such as automation, industry 4.0, digital signage, medical technology and transportation.

The company also offers a range of defined cables to connect LVDS displays. In addition to the Docking Connector, the box PC offers HDMI and DisplayPort connectors  for monitors, two Gigabit Ethernet ports with Intel I219V or I211AT chipset, as well as two RS232 and two RS232/422/485, which can be set via the BIOS. Further connections are: four USB 3.0, two USB 2.0 and audio with line-out. There is also a watchdog timer.

Distec supplies the embedded box PC with a pre-installed Windows 10 IoT LTSC 2019 OS. The Microsoft license, which is specially designed for the industrial market, guarantees worldwide use. The BoxPC Pro 7300 offers tool-free maintenance via knurled thumb screws that cannot be lost, adds Distec.

For cyber security, Distec equips the box PC with a TPM 2.0 chip for secure boot and to drive encryption with BitLocker, for example. Distec also offers protection, for instance in the event of a power failure or an attempted manipulation, by creating a customised Windows 10 IoT image with features such as an activated write filter.