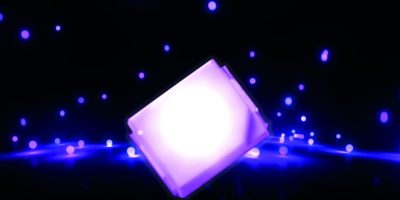 Active Diffuser Technology in the LPRM3268X3, introduced by OMC, is claimed to produce a richer, more efficient output than traditional single-wavelength devices.

The high brightness purple surface-mount LED lamp’s vibrant output and ease of driving makes it suitable for applications such as backlighting, mood-lighting, displays and status indication on items such as front panels and keypads, as well as signalling and industrial electronics, observes OMC.

The LPRM3268X3 SMD lamp requires very low current, has a compact footprint of only 3.2 x 2.8 x 1.9mm, with the industry-standard PLCC package.

OMC’s Active Diffuser technology combines a blue LED chip with coloured phosphour-based diffuser media in order to manipulate the light wavelength and give the desired output spectrum. According to OMC, efficiency is comparable to blue gallium nitride-based LEDs, which allows other colours to be produced at higher efficiencies than typically achieved when using different chip technologies.

The output consists of a wide spread of light wavelengths rather than a narrow peak, for a more intense, richer colour than traditional LEDs, claims the company.  Active Diffuser technology also delivers a more homogenous output, eliminating the wire-bond and lead-frame shadows commonly seen in the beam pattern of standard LEDs.

Before the introduction of the LPRM3268X3, the most common way to generating purple light from an LED was to mix red and blue light from a multi-chip device. This adds both complexity and cost to a design and requires more sophisticated drive circuitry. The LPRM3268X3 contains only a single LED chip, meaning it can be used in the same circuit layout as other standard LED colours, to simplify designs. (Other ways to generate purple light with LEDs involve the use of a 400nm LED chip, which is typically less efficient and incorporates a significant UV component to the output, adds OMC.)

OMC was founded over 30 years ago, as The Fibre-Data Group. Today, OMC is one of the longest-established specialist manufacturers of optoelectronics in Europe, headquartered in Cornwall, UK.

Accredited to ISO 9001:2008, ISO 14001:2004 and OHSAS 18001:2007 it is a pioneer in the development, manufacture and application of LED and fibre-optic technologies for a range of industries and companies worldwide, with a major focus on research and development, engineering and innovation.