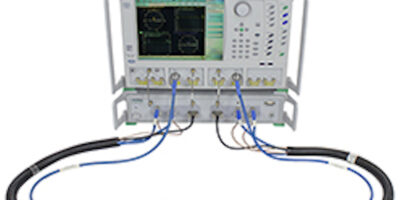 Operating at up to 125GHz, the VectorStar ME7838AX and ME7838EX have best-in-class performance over the widest frequency sweep, says Anritsu. They are believed to be the first vector network analyser (VNA) broadband systems to offer single-sweep coverage up to 125GHz / 110 GHz with guaranteed and typical specifications. The capability to sweep and provide characterised data through 125GHz provide design engineers with the ability to significantly and confidently improve their device models for dramatic improvements in first time yields and performance, said Anritsu.

Four broadband VectorStar-based VNA models from 10MHz (optional 70kHz) to 125GHz are available with guaranteed specifications. They exceed the guaranteed frequency sweep of the earlier VectorStar systems, the ME7838AX, ME7838A4X, ME7838EX and ME7838E4X to meet the market need for accurate verification of components and broadband applications operating at 122GHz, Anritsu confirmed.

To support measurements to 125GHz, Anritsu also introduces the 3656C Series calibration and verification kits that are characterised to 125GHz. Four versions are available.

The VectorStar ME7838AX / ME7838EX provide the best-in-class performance, according to Anritsu, with time domain analysis utilising the most points available in a single channel with the widest broadband frequency and best resolution. Other features of note for the VectorStar broadband systems are what is claimed to be industry-best millimeter wave (mmWave) noise floor and dynamic range at 120/125GHz, calibration and measurement stability of 0.05 degrees over 24 hours, and broadband measurement speed of one second at 1601 points, 10kHz IFBW.

The ME7838AX / ME7838EX are compatible with compact, lightweight mmWave modules for easy, precise, and economical positioning on the wafer probe station. They are the only mmWave modules compact enough to provide direct connection to on-wafer probes for maximum dynamic range and measurement stability. The series includes what is believed to be the first mmWave module with electronic power levelling to offer the widest power level control of up to 50dB.

Anritsu provides an efficient upgrade path to existing VectorStar ME7838 broadband system customers. The ME7838AX/EX systems are available in two- and four-port configurations.

The ME7838AX / ME7838EX have been developed for communication design engineers designing systems for on-wafer applications, as well as on-wafer production facilities where a combination of RF, microwave, and mmWave devices, components, and subsystems need to be measured on the same wafer. They are also suitable for research institutes exploring new technologies and system designs, manufacturers, institutes, and universities designing and developing silicon photonic solutions, and universities investigating emerging communications technologies.