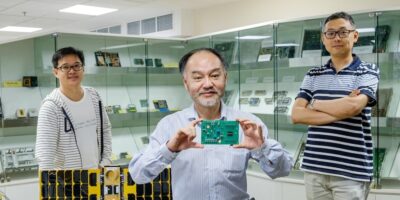 Satellites can be protected from radiation damage using a smart chip developed by researchers at Nanyang Technological University, Singapore and commercialised by start-up, ZES. Protected from heavy ion radiation, satellites could carry more sophisticated equipment in future and be less costly to build, says the researchers.

The patented technology can detect incoming heavy-ion radiation which can cause serious damage to satellite electronics. When the effects of radiation (single event latchup or SEL) are detected, the smart chip shuts down other electronics in the satellite safely and turns them back on once the danger has passed. The chip itself is hardened and protected against heavy-ion radiation and can stay ‘awake’ throughout the event.

A radiation-hardened power management integrated circuit (PMIC) for small satellite components is compact and allows electronic components to operate optimally without interruption to the power supply from heavy-ion radiation.

There is also a radiation-hardened ‘building block’ for silicon chip makers which would eliminate almost all errors in electronic circuits caused by random heavy ions, says ZES.

The Latchup Detection and Protection (LDAP) smart chip has been installed as part of the radiation-protection circuitry in three pico-satellites built by the Kyushu Institute of Technology, Japan, for Japan, Paraguay and the Philippines. The pico-satellites are due to be launched next year.

The  LDAP chip, it is now commercialised by NTU spin-off company Zero-Error Systems (ZES), and will allow satellite makers to use consumer-grade electronics, which are lighter, more compact, more cost-efficient, and yet significantly more sophisticated than conventional radiation-hardened components.

“By using our LDAP chip, satellite manufacturers are now able to employ the latest consumer-grade electronics, such as those used in mobile phones, to build satellites,” said Professor Joseph Chang, who is a founder and technical adviser at ZES.

“Pairing ZES technology together with advanced consumer-grade electronics will help to make it more cost-effective to launch satellites and constellations of satellites into space,” continued Dr Shu.

The technology for the LDAP has recently been awarded two patents and has been verified under heavy-ion tests in a cyclotron, a type of particle accelerator that generates radiation particles.