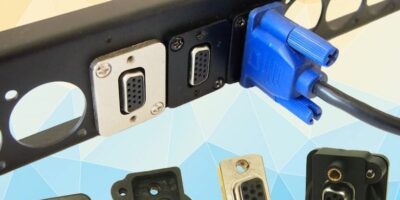 The popular 15-pin model is widely used for integration of equipment into video systems, pro-audio, broadcast, AV and data networking. The new VGA FeedThrough connector is claimed to be simple to assemble and may be supplied mounted on Cliff’s purpose built 19-inch rack panels, offering systems integrators fast and convenient system assembly.

The front-mounted VGA connector requires less space at the rear of the panel than competitors, Cliff claims, leaving more space for system hardware. Connection both sides is via standard 15-pin VGA male leads.

The VGA connector joins Cliff’s HDMI and USB versions. The company believes it offers designers every type of commonly used audio-visual connector from a single source.

Cliff’s XLR format FeedThrough connectors take advantage of the standard 24mm panel cut-out widely used in audio and broadcast systems and which is finding increasing popularity instrumentation, medical and industrial applications due to the format’s flexibility, security and reliability.

Cliff Electronics specializes in the design, development and manufacture of connectors, leads, test lead sets and accessories for a range of markets and supplies major international OEMs.

Cliff is a UK manufacturer and can respond quickly to requests for both standard products and custom designs. Cliff manufactures audio, optical and power connectors and accessories, general industrial connectors, foot pedals, lighting connectors, terminal posts and connection blocks, motors, fans and assembly aids. The company can also provide a wide range of leads including test and instrumentation, audio, instrument and power.

All versions of Cliff’s XLR footprint connectors are in full production and available direct from Cliff and via major distributors in the UK and Europe.