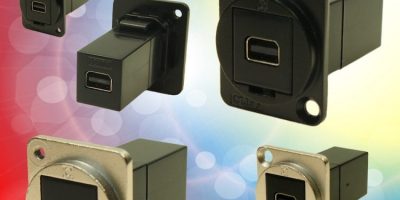 Connector specialist, Cliff Electronics, has added a Mini Displayport to its range of FeedThrough connectors. Assembled into an industry standard XLR connector panel cut out, the Mini DisplayPort (MiniDP or mDP) is a miniaturised version of the popular DisplayPort audio-visual digital interface

Cliff’s XLR format FeedThrough connectors uses the standard 24mm panel cut out, widely used in audio and broadcast systems and which where its security and reliability is being recognised in instrumentation, medical and industrial applications, making it increasingly popular in these environments.

The Mini DisplayPort is connected on both sides of the control panel using standard cables, to simplify system assembly. It is available with a plastic or metal faceplate, may be front or rear mounted to a panel and offers plain, countersunk or M3 threaded mounting holes.

Cliff Electronics designs, develops and manufactures connectors, leads, test lead sets and accessories for a wide range of markets and to major international OEMs. The UK manufacturer is able to respond quickly to customer’s needs for both standard products and custom designs.

All versions of Cliff’s XLR footprint connectors are in full production and available direct from Cliff and via major Distributors in the UK and Europe.