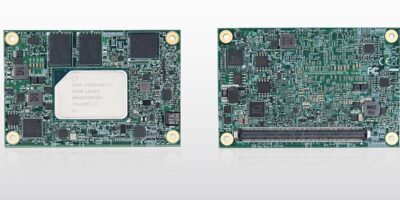 Based on the Intel Atom x6000E series processor (Elkhart Lake), the PCOM-BA02VGL is a COM Express Type 10 mini module by Portwell. It features an operating temperature range of -40 to +85 degrees C.

The PCOM-BA02GL measures 84 x 55mm and is based on the 10nm Intel Atom x6000E series / Pentium / Celeron processors (formerly Elkhart Lake). It supports up to four cores with 4.5 to 12W TDP (thermal dynamic performance) and integrates the Intel Gen 11 UHD graphics engine with triple displays support in 4K resolution.

The PCOM-BA02GL COM Express module supports up to 8Gbyte LPDDR4 3200M transfers per second SDRAM soldered onboard memory with integrated in-band ECC which allows more affordable standard memory to be used instead of more expensive ECC memory (ECC or non-ECC can be configured by BIOS), explains Portwell. The module can support up to 3.0GHz in turbo mode, increasing cost-performance effectiveness, adds the company. There are also two USB 3.2 Gen 2 (10Gbits per second), 2.5GbE LAN with the support of Intel TSN (time sensitive networking) and time co-ordinated computing (TCC) for real-time computing and control with low-latency capability. There are also four PCI Express x1 Gen 3 (8.0Gtransfers per second) expansion interfaces. According to Sid Huang, Portwell’s product manager, this is the first time PCIe Gen 3 is available in the lower power processors, ensuring the modules can fulfil most applications that need great expandability and higher throughput such as Wi-Fi, Bluetooth and NVMe modules. The PCOM-BA02GL COM Express module also supports dual 4K high resolution display including DP/HDMI and LVDS/ eDP that delivers up to two times faster graphics performance compared to the previous generation.

The low power Intel Atom processor x6000E family is housed on the PCOM-BA02GL module board. In this design, Huang explains, the company has maximises COM technology to produce a unit that not outputs under 4.5 to around 12W for fanless applications, but which also supports a wide industrial temperature range and wide voltage input (4.75 to 20V DC). The module conserves energy resources, minimises carbon impact and keeps energy budgets under control, he added.