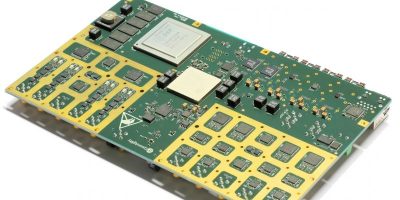 The platform is pre-integrated and tested with CommAgility’s Small Cell or Mobile LTE software for connectivity that can reduce both time to market and risk, says the company.

The CA-D8A4-RF4 has been designed for use in applications such as small cell, relay and terminal equipment, in private network markets including citizens broadband radio service (CBRS) and ground-to-air.

The CA-D8A4-RF4 provides a software-defined platform and bespoke LTE customisation at all protocol layers for customers to leverage LTE in real-world applications, explains CommAgility.

Baseband processing is performed by the TCI6638K2K SoC from Texas Instruments. The CommAgility LTE SmallCell software supports an eNodeB with 120 active, 360 connected users and a throughput of up to 300Mbit per second downlink, 102Mbit per second uplink. Evolved packer core (EPC) integration can also be supported to create a standalone network on the platform.

As a terminal, the mobile platform supports a Release 10 feature set with 20MHz bandwidth, two x two MIMO and 64QAM. Combined with CommAgility’s LTE UE software, it can be used for differentiated LTE UE products that require customisation. Enhancements, such as extended Doppler shift and latency for high-speed, long range applications, are available.

The CA-D8A4-RF4 has a software-defined RF front end with four transmit and receive channels supporting bands between 410 and 5925MHz with bandwidths up to 100MHz, sufficient for 5G new radio development. Independent front end modules support TDD and FDD modes of operation at up to +21dBm rated power output per antenna and allow easy customisation for different frequency bands or higher power outputs. The channels can be operated in four x four MIMO or two x two MIMO 2CC carrier aggregated mode. Three CPRIs are provided to support remote radio head operation if required.

A range of build options is available, and further customisation of the platform and enclosure design is possible in volume. The CA-D8A4-RF4 will be available from July 2018.