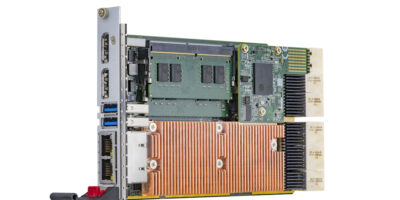 Hot swap upgrades of demanding mission-critical applications for transportation, aerospace and defence, and industrial automation are possible with the cPCI-A3525, a CompactPCI serial processor blade from Adlink. The processor blade is powered by 9th Gen Intel Xeon/Core i7 processor (formerly known as Coffee Lake Refresh) and is supplied in a robust 3U single-slot (4HP) module.

The standard is the fastest, most versatile, and cost-effective open standard using PCI Express (PCIe) and supports additional high-speed interfaces, including SATA, USB, and Ethernet.

The multi-core 9th generation Intel Xeon/Core i7 processor has up to 32Gbyte DDR4 2666MHz dual-channel SODIMM, and, depending on the specified processor, can support ECC-type memory. The CM246 chipset with AMI UEFI BIOS and dual 128Mbit SPI flash memory supports Microsoft Windows 10 and Linux as standard, with other operating systems on request.