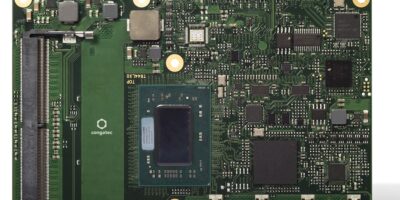 Embedded computing specialist, congatec has extended its conga-TR4 series of COM Express modules with processors from the AMD Ryzen Embedded R1000 series. The energy-efficient processors are based on AMD’s Zen microarchitecture and are claimed to deliver the best low-power computing performance in its class.

The conga-TR4 modules offer two multi-threaded cores, support for three 4K displays with AMD Radeon Vega graphics processor unit (GPU) featuring three compute units. The thermal design power (TDP) is scalable from 24 to 12W and the CPU has speeds of up to 3.5GHz. This is sufficient processing power for individual threads, confirms congatec. The graphics performance means that the modules can be used where immersive graphics are required.

The COM Express computer on modules (CoMs), based on the AMD Ryzen Embedded R1000 series are suitable for use in graphic-rich, multi-display systems for gaming and digital signage, medical imaging and industrial automation. Another application area is headless systems, where the GPU is used for massively parallel data processing, for example in communication infrastructures, where the modules are used for security applications or for uCPE, SD-WAN, routers, switches and unified threat management (UTM).

The modular system design is based on standardised CoMs, which is claimed to provide lower development costs and faster time-to-market due to an application-ready computing core. There are also advantages from the flexible performance scalability even across processor sockets and generations, and high long-term availability, says congatec.

The conga-TR4 high-performance modules with COM Express Type 6 pinout are based on the latest AMD Ryzen Embedded R1505G and R1606G multi-core SoCs. They support up to 32Gbyte dual-channel DDR4 memory with up to 2400MT per second and optional ECC for data security. The immersive AMD Radeon Vega graphics with three compute units support up to three independent displays with up to 4K UHD resolution and 10-bit HDR, as well as DirectX 12 and OpenGL 4.4 for 3D graphics.

The conga-TR4 allows a complete USB-C implementation on the carrier board including USB 3.1 Gen 2 with 10 Gbits per second, Power Delivery and DisplayPort 1.4, for example to connect external touchscreens with a single cable. There are also a PEG 3.0, three PCIe Gen 3, four PCIe Gen 2, two SATA Gen 3, three USB 3.1 Gen 2, one USB 3.1 Gen 1, eight USB 2.0, and one Gbit Ethernet interfaces. High Definition Audio and I/Os for SD, SPI, LPC, I²C as well as two UART from the CPU complete the interface options.

The modules are supported by Linux, Yocto 2.0 and Microsoft Windows 10, or Windows 7.