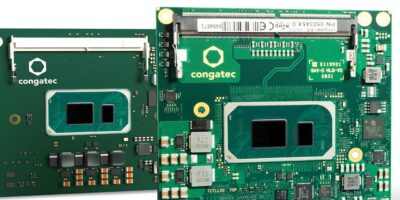 Two design options, a COM-HPC and a COM Express module, have been launched by cognate, in parallel with the 11th Gen Intel Core processor launch (code named Tiger Lake).

The 11th Gen Intel Core processors boost CPU performance boost, have a fast DDR4 memory, expansive PCIe Gen4 and USB 4.0 bandwidth. There are also features that are critical for communication-connected edge computers, says congatec, such as support for hypervisor technologies.

The choice of COM Express or COM-HPC allows engineers to choose what is appropriate for the application. For example, says cognate, the COM Express has an improved connector design, which is expected to offer better bandwidth capacities compared to what was previously available. Engineers can consider using high bandwidth interfaces such as PCIe Gen 4.

The COM-HPC Client size A module (conga-HPC/cTLU) and  the COM Express Compact (conga-TC570) modules will be available with the 11th Gen Intel Core processors. Both modules are the first to support PCIe x4 in Gen 4 quality to connect external peripherals with massive bandwidth. Designers can leverage 8x PCIe Gen 3.0 x1 lanes.

Sound is provided via I2S, SoundWire by COM-HPC, and HDA by COM Express modules.

Board support packages are provided for all leading OS’s like Linux, Windows and Chrome, as well as hypervisor support from Real‑Time Systems.

congatec provides engineering support and is creating a COM Express and COM-HPC design decision guide and a white paper, available via the company’s website.