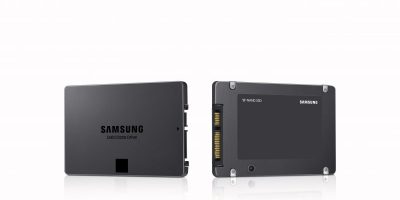 Based on one-Tbit V-NAND with performance equivalent to the company’s three3-bit design, Samsung’s QLC SSD is expected to boost memory in smartphones with high capacity for memory storage.

According to Jaesoo Han, executive vice president of memory sales and marketing at Samsung Electronics, the SATA SSD will “herald a massive move to terabyte-SSDs for consumers”. He added: “As we expand our line-up across consumer segments and to the enterprise [sector], four-bit Tbyte-SSD products will rapidly spread throughout the entire market.”

Typically, as data stored within a memory cell increases from three bits to four, the chip capacity per unit area would rise and the electrical charge (used to determine information from a sensor) would decrease by as much as 50 per cent, making it considerably more difficult to maintain a device’s desired performance and speed, explains Samsung.

However, the four-bit four-Tbyte QLC SATA SSD is claimed to maintain its performance levels at the same level as a three-bit SSD, by using a three-bit SSD controller and TurboWrite technology, while increasing drive capacity through the use of 32 chips, all based on 64-layer fourth-generation one-Tbit V-NAND.

In addition, the company expects to provide M.2 NVMe SSDs for the enterprise market this year and begin mass production of four-bit fifth-generation V-NAND to expand its SSD lineup to meet the growing demand for faster, more reliable performance across next-generation data centres, enterprise servers, and enterprise storage.