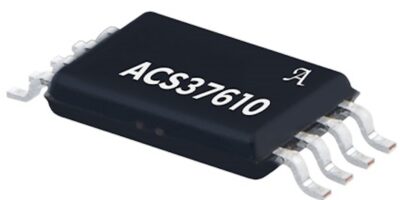 Claimed to be the industry’s first current sensor to measure 100 to 4,000A and above without a core or u-shaped magnetic shield, the ACS37610 also has advanced fault detection features to reduce system bill of materials (BoM), says Allegro MicroSystems.

The coreless Hall-effect current sensor is designed for demanding automotive and industrial systems. According to Allegro, it offers high accuracy and sensitivity, additional fault detection capabilities, and user programmability.

The ACS37610 sensor joins Allegro’s ACS37612 in what is believed to be the industry’s first family of truly coreless Hall sensing devices designed to measure currents from 100 to 4,000A flowing through a bus bar or PCB trace without needing an external concentrator or U-shaped magnetic shield. Accuracy is typically one per cent. As a result, system designers can achieve enhanced efficiency and higher power density while reducing system complexity, BoM, cost, footprint, and weight, says Allegro.

The ACS37610 IC enables developers to accurately measure hundreds or thousands of amps in a very economical and simple way, said Shaun Milano, Allegro’s director of current sensors. “Our differential Hall-based sensors provide excellent immunity to stray magnetic fields without the need of a shield, required by competing solutions, that slows down response and adds non-linearity error into the system,” he added.

A slight notch to the current-carrying bus bar or PCB copper trace provides further improvements to the system’s SNR. The ACS37610 features larger Hall element spacing (2.5mm versus 1.8mm for the ACS37612) to accommodate wider notches. This results in virtually no thermal performance degradation and no hotspots. The sensor can be mounted in a horizontal or vertical orientation relative to the bus bar, for flexible options in mechanical assemblies.

The company also offers evaluation kits and reference tools for current flowing through a PCB or bus bar.