Data centre acceleration card is based on MPPA processor 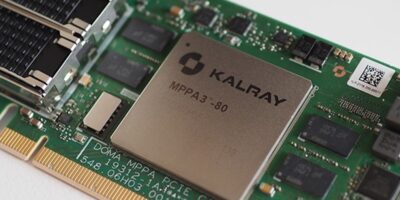 The K200- LP acceleration card is the latest member of Kalray’s fully programmable, multi-purpose acceleration card family. It is based on the MPPA processor. The card targets the non-volatile memory express (NVMe) -based storage market. The explosion of data, driven by services and applications using artificial intelligence (AI) and data analytics, is putting a lot of pressure on cloud and edge data centre networking and storage. The driving trends are to reduce latency, enhance bandwidth and input/output operations per second (IOPs) performance, offload the host CPUs while remaining cost-efficient. Data centers are looking for high performance, low power, cost effectiveness and openness to scale and match demand on data availability, explains Kalray.

The K200-LP acceleration card is natively capable of managing multiple workloads with no bottleneck to enable smarter, more efficient, and energy-wise applications on cloud and edge data centres, explained Kalray’s president and CEO, Eric Baissus. , To address the new generation of storage array solutions for cloud and edge, K200-LP is a game changer solution in terms of performance per Watt and per dollar, he said.

To improve and optimise overall IT infrastructures, the industry has moved increasingly towards disaggregated storage where compute resources and storage resources are separated.

Kalray runs all the critical functions of a disaggregated storage appliance on the single Kalray MPPA processor. Advanced data processing units (DPUs) like MPPA and associated acceleration cards are cost-optimised compared with traditional x86, says the company. Protocols such as NVMe (non volatile memory express) and NVMe-overFabric (NVMe-oF) access and unleash the full capability of SSDs wherever they are located in the data centre as if there were locally attached.

The industry has defined a new NVMe protocol to support the latest generation of fast storage devices, but existing traditional technologies are not capable of exposing the full capability of NVMe-based SSDs, says Kalray. The K200-LP smart storage card supports those data protocols. The low-profile, 2x 100Gbit per second Ethernet, PCIe Gen4 card can deliver more than 2MIOPS and 12Gbytes per second per card (both RoCE and TCP) with a latency as low as 30 microseconds.

K200-LP has been developed by Kalray and is manufactured by Taiwanese Wistron.