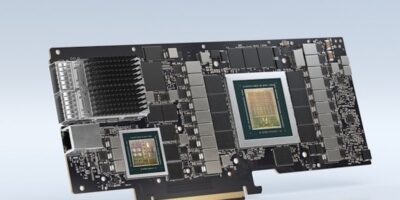 At GTC, a virtual, global event hosted by Nvidia, the BlueField-2 family of data processing units (DPUs) was introduced. They are supported by DOCA, a data centre infrastructure on a chip architecture that raises networking, storage and security performance, says the company.

The BlueField-2 DPU can deliver the same data centre services that could consume up to 125 CPU cores, said the company, to free up the CPU cores to run other applications.

The BlueField-2X DPU, additionally has an Nvidia Ampere GPU with AI capabilities that can be applied to data centre security, networking and storage. Third generation Tensor Cores enable it to use AI for real time security analytics, including identifying abnormal traffic, which could indicate an intruder, together with host introspection to identify malicious activity, and dynamic security orchestration and automated response.

BlueField-2 DPUs are sampling now and BlueField-2X DPUs are under development and expected to become available in 2021.