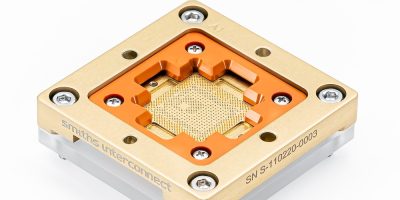 It was developed in response to requests for increased functionality in the smallest possible footprints. There are many reasons for this. One is the rapid expansion of connected devices and data-intensive applications is driving demand for efficient and adaptive high performance computing (HPC). Another is the fact that mobile devices such as cell phones, tablets and car infotainment systems have sophisticated SoCs which combine CPU, GPU, AI engine, camera processor, memory, and 5G modem in small form factors.

The quest for increased functionality in the smallest possible footprint has led to a reduction of the pitch of ICs below 500 micron. At the same time, increased performances in SoCs affect pin-to-pin noise, known as crosstalk, during testing.

Smiths Interconnect’s DaVinci Micro test socket leverages the DaVinci coaxial technology for IC applications to 350 micron pitch to provide pin-to-pin isolation, negating the effect of crosstalk during test, and substantially improving the accuracy of chip performance testing, claimed the company. The design protects the small diameter signal probes and ensures that the product can be deployed and withstand the rigours of a production test environment.