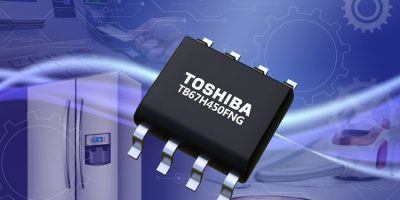 The H-bridge driver offers a maximum rating of 50V/3.5A and the industry’s lowest standby current, claims Toshiba. The TB67H450FNG is fabricated using Toshiba’s BiCD process and can drive brushed motors with voltages from 4.5 to 44V. It can be used in industrial and commercial equipment including office automation and banking terminals, white goods and home appliances, such as robot vacuum cleaners.

The power supply circuit controls the VCC regulator in standby mode, for a low standby current consumption of 1.0 microA to save power in many modern battery-powered applications such as small household robots and electronic locks as well as devices powered by 5.0V USB power supplies and improves the battery life of battery powered devices.

The IC measures just 4.9 x 6.0mm to minimise PCB space and is claimed to offer “excellent thermal performance” via the E-pad included in the package.