DC link capacitors have low ESL for inverter use 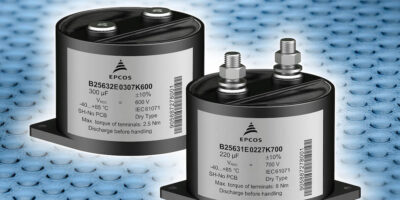 The current handling capacity can be up to 60A at 65 degrees C with the ability to tolerate current peaks of up to 7.5kA. The maximum permissible hot spot temperature is 85 degrees C.

The capacitors’ low ESL values can be down to 13 nH, depending on the type. In addition to low ESR values of at least 0.9 mOhm, the B2563xE series capacitors are suitable for inverter use with fast switching power modules. The low ESR value remains stable even at high switching frequencies of 100kHz, while the low parasitic co-efficients prevent significant voltage over-shoots even when high currents are switched off.

TDK is based in Tokyo, Japan. It was established in 1935 to commercialise ferrite, a key material in electronic and magnetic products. It has a portfolio of passive components such as ceramic, aluminium electrolytic and film capacitors, as well as magnetics, high-frequency, and piezo and protection devices. There are also sensors and sensor systems such as temperature and pressure, magnetic, and MEMS sensors. In addition, the company provides power supplies and energy devices and magnetic heads.

TDK focuses on demanding markets in automotive, industrial and consumer electronics, and information and communication technology. The company has a network of design and manufacturing locations and sales offices in Asia, Europe, and in North and South America.