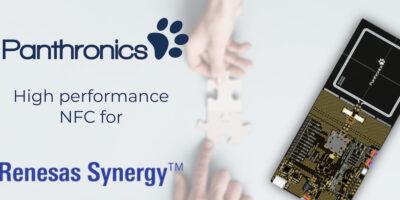 Fabless semiconductor company, Panthronics, has developed an extension of the evaluation kit for its PTX100R NFC Reader IC which will accelerate development of NFC applications on the Renesas Synergy family of 32-bit microcontrollers.

Panthronics developed an IoT NFC reader application to run on the Renesas Synergy TB-S3A1 development board for the Synergy S3A1 microcontrollers which are based on a 48MHz Arm Cortex-M4 core. NFC physical and protocol layer operations are performed on a Panthronics PTX100R Evalboard, which connects to the TB-S3A1 board via its Pmod header. The application provides full NFC reader functionality conforming to the standard ISO 14443A/B/F/V specifications.

The PTX100R Evalboard and IoT NFC Reader application are integrated into the Synergy software package from Renesas and its e2 studio integrated development environment (IDE).

Commenting on the introduction, Mohammed Dogar, senior director of global business development at Renesas, said: ‘Simple contactless communication is one of the key supporting technologies for the IoT, enabling important functions such as secure device authentication, device onboarding, and pairing with a gateway for Wi-Fi or other networks.

The PTX100R NFC hardware and application means that any Synergy MCU user, whether or not they are NFC experts, can introduce NFC functionality into their system design quickly and easily, he adds.

Developers of NFC-based end products such as mobile point of sale terminals and mobile phones can use the PTX100R to complete product development faster, with easier validation of conformance with standards such as EMVCo 3.0.

The PTX100R Evalboard supports full NFC functionality. It includes a 50 x 50mm detachable antenna board, with its matching circuit, which allows users to evaluate the PTX100R’s performance with their own antenna.

Developers using the PTX100R Evalboard can also take advantage of dedicated applications engineering support provided directly by Panthronics via the online PTX Support Portal. The portal provides password-protected access to a knowledge base of product data, articles and guidance for each of four types of application: point-of-sale terminals, wireless charging, IoT devices, and mobile devices. It also provides APIs, a configuration tool and a GUI with installer. Registered users of the portal can access 24/7 engineering support by issuing ticket requests.

Bernhard Gruber, director of applications at Panthronics, said: ‘Renesas and Panthronics have worked closely together to integrate the PTX100R’s functionality and firmware into the Synergy Platform development system. For developers building applications on the Synergy Platform, there is now a ready-made way to integrate NFC reader functionality, and benefit from the robust connectivity and design flexibility afforded by the PTX100R.’

Design engineers may request a Renesas Synergy IoT Reader Demo Kit or a PTX100R Evalboard via the Panthronics website.