Demonstration board drives eGaN FETs for ToF and lidar systems 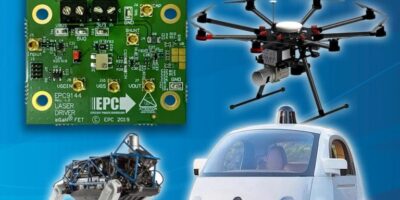 It is designed to illustrate the use of eGaN FET technology in developing systems that enhance the accuracy, precision, and processing speed of time of flight (ToF) and flash lidar systems.

Reliable ToF systems rely on the speed and accuracy of object detection. EPC says that the EPC9144 board demonstrates the rapid transition capability of the company’s AEC Q101-qualified EPC2216 eGaN FETs to provide power pulses to drive laser diodes, vertical-cavity surface-emitting laser (VCSELs) or LEDs up to 10 times faster than an equivalent MOSFET, in a small fraction of the area, energy, and cost.

The EPC9144 ships with an interposer board. This is a collection of break-away 5.0 x 5.0mm square interposer PCBs with footprints to accommodate different lasers, RF connectors and other footprints designed to allow engineers to experiment with different loads in development projects. The use of the interposers allows many different lasers or other loads to be mounted, allowing users to test the performance with the load requirements that are appropriate to their application, adds EPC.

GaN can be used in autonomous vehicles and other ToF applications, advises the company, such as facial recognition, warehouse automation, drones and topological mapping. The EPC9144 can also be used for applications requiring a ground-referenced eGaN FET, for example, in class E or similar circuits.