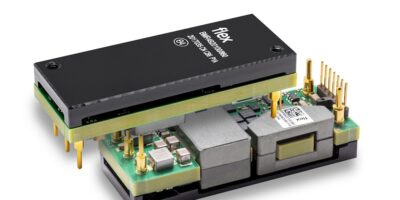 Capable of delivering between 600 to 800W of continuous power, the BMR492 series of digital eighth-brick intermediate bus converters have a peak power of up to 1,100W for short periods of less than one second. This burst mode operation is commonly required for CPUs (such as Intel’s Ice Lake processor, for example) for datacomms and data centre applications, advises Flex Power Modules.

The BMR4920302/861 converter is the first of three variants of the BMR492 family. It delivers a 12V output and is rated to a maximum 600W output over an input voltage range of between 40 to 60V. The DC/DC step-down converter is suitable for nominal 48 or 54V input voltage systems commonly found in data centre server applications. The through-hole mounted device is fully regulated and includes an input to isolation voltage of 1500V DC.

The BMR492 has efficient operation, with a peak efficiency of 96.7 per cent at 48Vin at half load. The output voltage is pre-programmed at 12V as standard, but this can be adjusted across a wide range of 8.0 to 13.2V via the incorporated PMBus interface. This interface is also useful to optimise system level efficiencies through dynamic bus voltage adjustment according to the supplied load, advises Flex Power.

The BMR492 delivers a power level that was previously only made possible in a quarter-brick format, claims the company. “The reduction of board area . . . enables our customers to free up space on PCBs for the core technology of their designs rather than for power,” said Olle Hellgren, director of product management and business development at Flex Power Modules.

Supplied in an industry-standard eighth-brick format, the BMR492 measures 58.4 x 22.7 x 12.7mm (2.3 x 0.90 x 0.34 inches). The baseplated converters have a standard DOSA pinout including the seven-pin digital header for the PMBus interface.

Over-voltage, over-temperature and short-circuit protection mechanisms help to provide a prolonged operational lifespan with a mean time between failures (MTBF) of 6.64 million hours. The BMR492 complies with IEC/EN/UL 62368-1 safety standards. The converter’s operational temperature range is -40 to +125 degrees C.

The BMR492-0302/861 variant is available in OEM quantities from April 2021. Final specifications may be subject to further modification. Future variants are expected to be introduced later this year.