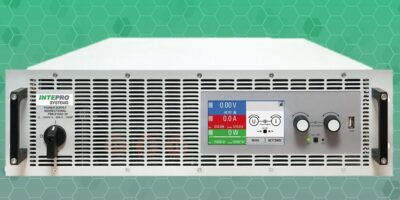 Programmable digital power supplies in the PSB series by Intepro systems are microprocessor controlled bi-directional supplies that feature an auto-ranging DC power supply and an electronic DC load with energy recovery in the same piece of equipment.

The bi-directional package replaces individual programmable sources and loads, and the regenerative load returns up to 95 per cent of test energy to the grid.

The PSB series enables two-quadrant operation in a single instrument eliminating the need for two topologies, advises Intepro. Combining the features of a programmable source and regenerative programmable load into one chassis frees up rack space, reduces weight and cost, and reduces generated heat while recovering load energy back to the grid.

Intepro PSB power supplies are available with outputs of 15kW in a 3U, 19 inch rack chassis (PSB 9000) and 30kW in a 4U chassis (PSB 1000). They may be connected in parallel for operation up to 2MW. The auto-ranging bi-directional output stage maintains full power over a wide output range while bi-directional operation provides seamless transitions between source and sink modes, claims Intepro.

A capability that distinguishes the Intepro PSB series is the ability to be programmed to seamlessly switch between source and sink with no ‘off’ time. When operating as the load, the device synchronises with its three-phase power input to recover up to 95 per cent of the energy. When operating as a source, the unit has an efficiency of up to 93 per cent, generating less heat in both modes. This provides further energy savings by reducing the cooling costs in the test environment, Intepro notes.

The PSB series features a wide range three-phase input voltage from 342 to 528V, 45 to 66Hz, with output voltage ratings of 60 to 2,000V and current ratings from 40 to 1000A. Programmable functions are included to simulate complex testing, such as electric vehicle load profiles, battery charging, PV simulation per EN 50530 and MPP tracking.