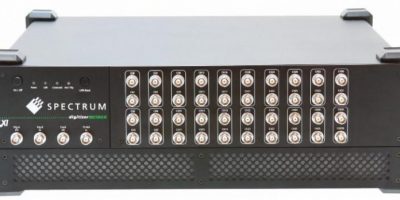 In all, there are 12 digitisers that have been added to the LXI-based digitizerNetBox data acquisition instruments, by Spectrum.

They deliver precision measurements for up to 48 channels and are synchronised for multi-channel applications covering DC to 60MHz, says the company.

The DN6.59x series digitisers are designed specifically for situations where multiple signals need to be acquired, stored and analysed, users can select from models that provide 24, 32, 40 or 48 fully synchronised channels. Models are based on high resolution 16-bit ADC technology and come with a choice of maximum sampling rates (20, 40 and 125 Msamples per second) and bandwidths (10, 20 and 60MHz) to match applications found in a variety of industries. The instruments are suitable for use in multi-channel applications where signals, in the DC to 60MHz frequency range, need to be acquired and analysed with the highest precision and accuracy.

Each channel of a digitizerNetBox has its own ADC and signal conditioning circuitry. The ADCs share a common clock so that the acquisitions made on all the channels are fully synchronous and have zero phase error. The design of the clocking system ensures that cross channel timing measurements are made with the highest possible precision while the independent signal conditioning enables the units to be used with signals that have a wide range of amplitudes. Each channel has its own programmable input amplifier, with ranges between ±200mV and ±10V, input offset for unipolar measurements, termination of 50 Ohm and 1 MOhm and an integrated calibration circuit. The inputs also feature single-ended and true differential channel modes.

In addition to the signal conditioning circuitry, the high-resolution 16-bit ADCs offer signal to noise ratio (SNR) up to 81dB, spurious free dynamic range (SFDR) up to 103dB and total harmonic distortion (THD) as low as -86dB.

The digitizerNetBox systems can be used by any engineery working with multiple signals, such as those produced by arrays of sensors, receivers, detectors or antennas, says Spectrum, as well as users who need to test signals from multiple electronic components or test points. Target applications are ultrasound, laser communications, radar, power, physics, automotive, medical and materials science, as well as general test and measurement.

Data is controlled and accessed by connecting the digitizerNetBox with GBit Ethernet to a host computer or anywhere on the corporate network. The platform is LXI-compliant (following Core 2011 Specifications) and offers an IVI compatible interface for the IVI Scope and IVI Digitiser classes. Users can write their own control program using C++, LabVIEW, MATLAB, VB.NET, C#, J#, Delphi, Java and Python code. Alternatively, users can simply run Spectrum’s own software, SBench 6 Professional software, supplied as standard with the digitizerNetBox.