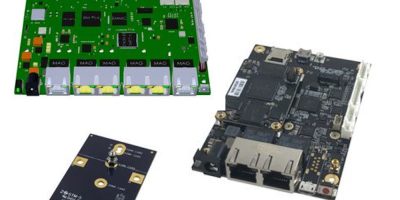 A distribution agreement with Gateworks means that Farnell now stocks rugged, industrial specification single board computers (SBCs). Gateworks’ SBCs contribute to a low system failure rate in the field. The devices are in stock and available to buy now from Farnell.

The Gateworks family of SBCs are for use in rugged conditions. They are designed from the ground up with components that can withstand shock, vibration, electrostatic discharge and transient voltages in harsh and high temperature environments, said Gateworks.

The products provide useful system diagnostic capabilities such as critical voltage rail and board temperature monitoring circuitry. They also have an external watchdog timer that can hard power cycle the board in the event that its application software becomes unresponsive.

Farnell’s initial product portfolio of the Venice range of industrial SBCs include a 64-bit Arm CPU, Mini-PCIe slots, multiple Ethernet and an industrial temperature rating from -40 to +85 degrees C.

The Venice GW7400 SBC includes the capabilities of the GW7200 but its i.MX8M Plus SoC also features a neural processing unit (NPU) operating at up to 2.3TOPS, a video processing unit (VPU) supporting up to 1080p60, a GC7000UL graphics processing unit (GPU) and a Cadence Tensilica HiFi 4 DSP. Six total Gigabit Ethernet ports offer one WAN and five switched LAN wired connectivity. It also has a range of expansion and digital I/O, analogue Input, audio, video input/output with further expansion options available.

The SBCs operate on Linux software support for Ubuntu and Buildroot.

A selection of products from the Venice family now available for fast delivery from Farnell include:

Gateworks range of rugged SBCs are available from stock at Farnell in EMEA, Newark in North America and element14 in APAC.