Dual-band antenna makes 10Gbits per second at 10km a reality 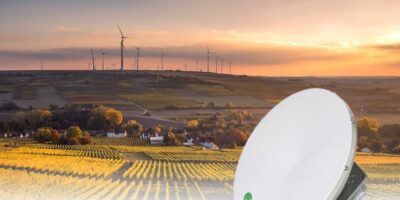 For use with Siklu’s ExtendMM feature on its E-Band models, the EtherHaul 610mm/two-foot dual-band antenna (EH-ANT-2ft-DL5) makes 10Gbits per second links up to 10km, a reality, says Siklu.

The 70/80GHz (E-Band) and 5GHz dual-band antenna is intended to be used with Siklu’s ExtendMM feature in its the EtherHaul™ 8010FX, 2500FX and other Siklu E-Band models.

ExtendMM is a Siklu product suite consisting of the new dual-band antenna, software for monitoring and provisioning, a built-in switch in the EtherHaul radios, and purpose-built accessories, all of which are integrated with Siklu SmartHaul apps – such as LBC for link planning and WiNDE for network design.

According to Siklu, the hardware and software combines a high-capacity EtherHaul link seamlessly with an inexpensive, unlicensed, low capacity and lower frequency link, such as 5, 11, 18 or 23GHz. Customers can use it to extend EtherHaul links to distances of 10km.

Combining the dual-band antenna with ExtendMM simplifies installation, says Siklu, as it only requires a single cable run to the rooftop or tower, as opposed to two cables for two antennae. This saves both time and labour costs during installation, as well as recurring payments for hosting fees.

The ExtendMM dual-band solution will be showcased at WISPAPALOOZA 2019, Las Vegas, 14-18 October, stand 648.

Siklu delivers multi-gigabit wireless fibre connectivity in urban, suburban, and rural areas. Operating in the mmWave bands, Siklu’s wireless solutions are used by leading service providers and system integrators to provide 5G Gigabit wireless access services and can also be found in smart city projects requiring extra capacity such as video security, wi-fi backhaul and municipal network connectivity all over one network. Rados can be installed on street-fixtures or rooftops, for networks requiring fast and simple deployment of secure, wireless fibre.