Editors Blog – Africa: A hands-on approach to investing in tech 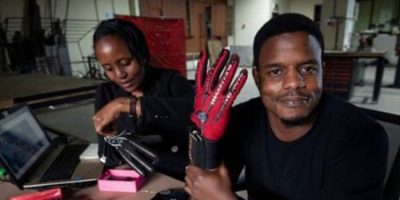 Enterprise and opportunity are hallmarks of the African technology sector. Caroline Hayes looks at the economic factors and examples of wearable technology from the region.

Mobile connectivity across the vast continent of Africa has attracted interest in the tech community for some time and this was crystallised at the Africa Technology Summit which was held in London this month.

Developing small to medium sized enterprises (SMEs) and the consumer market were cited as priorities for the region’s tech sector. The continent is developing fast, with telecomms and connectivity gathering pace, but confined to city areas.

(Africa has a population of 1.2billion and in rural areas, over 80 per cent of the population (around 600 million people) may not have access to electricity today.)

Fintech operators can drive commercial and consumer banking, supporting smaller businesses and delivering access to mobile payments to pay for lighting and heating in remote areas.

The 2019 Gartner CIO (chief information office) Agenda Survey, compiled from responses from 62 CIOs from Africa, representing $4.4 billion in IT spending, showed that IT budgets are expected to rise next year an average of 4.3 percent in 2019. The CIOs expect spending to be concentrated on business intelligence and analytics and cyber security.

The use of data analytics, machine learning and communications are neatly combined in a single example, reported by the website Pulse Kenya.

Roy Allela, a technical evangelist and program manager at Intel in Kenya, has created the Sign-IO smart gloves that can convert sign language hand gestures into audio speech to open up communication between those who can sign and those who can’t.

The gloves have sensors in each finger which senses the movement of the finger to interpret the word being signed and send the audio, via Bluetooth, to a linked mobile phone app.

Translations are in real-time and the speed of interpretation as well as pitch, speed and tone of the voice can be customised.

The gloves are still at the prototype stage, as data still needs to be gathered by machine learning for a comprehensive and universal library.