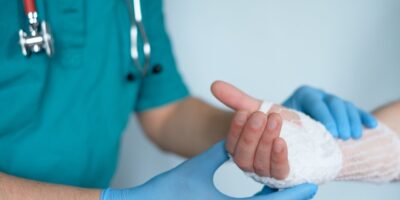 Dressings and bandages made with electrically conductive fibres or graphene go beyond sealing and protecting a wound, Caroline Hayes discovers. They can administer medication and monitor a wound for a remote diagnosis.

A bandage of electrically conductive fibres were coated in a hydrogel but a research team at the University of Nebraska-Lincoln, Harvard Medical School and MIT.  The gel could contain antibiotics, tissue-regenerating chemicals or painkillers.

When a smartphone controlled app or wireless device activates a microcontroller, a small voltage is directed to particular fibres to heat the hydrogel and release its medication.

The team of researchers believes that the bandage could heal chronic wounds or be used in military environments because early experiments show the bandage could regenerate skin tissue three times faster than a standard bandage which keeps medication applied to a wound and keeps it clean.

The fibre make up of a bandage means that it could accommodate multiple medication types, and be customised to a chronic injury where the level of control and administration of medication could improve or accelerate healing.

“This is the first bandage that is capable of dose-dependent drug release,” Ali Tamayol, assistant professor of mechanical and materials engineering at Nebraska, told Nebraska Today.

“You can release multiple drugs with different release profiles. That’s a big advantage . . . What we did here was come up with a strategy for building a bandage from the bottom up,” he added.

One use of the bandage is to treat chronic skin wounds that stem from diabetes as well as those to accelerate the healing of bullet or shrapnel wounds in battle and prevent infection to cuts received in remote areas to protect the wound until medical help can be administered.

Experiments, using wounded mice, showed that when wearing the smart bandage, the mice regrew three times as much blood-rich tissue, used for healing the wound, as those wearing a dry bandage.  The application of heat did not affect the bandage’s performance in this or in antibiotic-loaded bandages during experiments.

Figure 1: A prototype of the smart bandage. Picture:  The researchers are continuing testing on animals and then humans. They are also developing a version with thread-based sensors that can measure glucose, pH and other health-related indicators of skin tissue.

The design uses Food and Drug Administration-approved components and a prototype is being tested by the FDA.

In France, biotech start up, Grapheal has integrated graphene electrodes into a polymer film to create a patch that can monitor chronic wounds, such as a diabetic skin ulcer.

The electrodes are in direct contact with the wound and if its pH level should rise, indicating increased infection, the conductivity of the electrodes changes. The data is wireless transmitted to a smartphone or tablet and relayed to a cloud based server for analysis by a GP, practice nurse or specialist physician.

The status of chronic wounds can be checked remotely without having to remove the dressing. Graphene has antibacterial qualities so the bandage could also help with the healing process as well as update medical staff.

There are many benefits to remote monitoring. Patients suffering chronic illnesses may not be as able to attend a surgery or hospital appointment, so remote monitoring is convenient. It also saves medical staff time, for more patients to be seen in a working day.

Grapheal says that its patented method of integration on polymer produces soft, flexible and fully biocompatible electrodes for use as patches in dressings. The sensors are bio-compatible and non-invasive and are sensitive to bio-film and body fluids while being flexible, breathable and transparent.

Researchers at the Chinese Academy of Sciences have added chemicals to a bandage that change colour when drug resistant or drug sensitive bacteria is present. Once the colour change is observed, antibiotics can be released to fight them.

The bandage is loaded with chemicals creating a pH indicator (pathogenic bacteria typically create a high acidic environment). The bandage is initially green and turns yellow over a period of four hours if it detects bacteria that are sensitive to antibiotics. The bandage also contains nitrocefin which will turn red if it detects the beta lactamase enzyme which is produced by drug-resistant bacteria.

After a short period of time, doctors and patients can see how the wound is healing. It means that antibiotics are not used when they are not required.

The bandage is also loaded with the antibiotic ampicillin. The nanomaterial of the bandage dissolves in acidic conditions, releasing the antibiotic. For drug-resistant bacteria, the bandage includes material that reacts to bright light by releasing reactive oxygen species (ROS). These molecules either kill or weaken microbes allowing them to be killed by antibiotics.

The bandage has been tested on mice with drug-sensitive or drug-resistant infections and, researchers believe that the paper bandage can be scaled up for clinical use.

This article is exclusive to weartechdesign.com