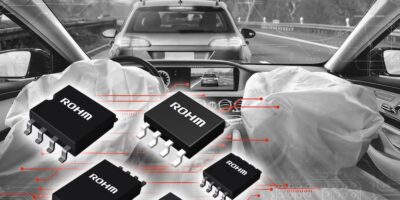 Claimed to achieve a writing time of 3.5ms, the BR24H-5AC series of EEPROMs released by Rohm Semiconductor, target applications that require data storage under harsh environments, such as factory settings for on-board cameras and sensors, airbag operating history, and data logging for always-on operating industrial automation systems and servers.

The BR24H-5AC EEPROMs are believed to be the first in the industry to achieve a writing time of 3.5ms by implementing original data writing and reading circuit technology, instead of the 5ms of conventional products. Additionally, while standard products are capable of just one million rewrites, the BR24H-5AC series guarantees up to four million writing cycles by data endurance. This characteristic extends application service life, but is also particularly suitable for data loggings requiring frequent data rewrites.

For the automotive and industrial equipment sector, where safety and traceability requirements make it necessary to store the operating history in non-volatile memory in the system, the EEPROMs can be used in place of other types of non-volatile memory such as flash memory in applications that require high reliability due to their ability to reliably write and store data under harsh conditions.
The BR24H-5AC series of I²C bus EEPROMs is designed to reduce process time before factory shipment in automotive and industrial equipment applications.

The EEPROMs can be used for storing factory settings, for example in on-board cameras in a vehicle’s advanced driver assistance systems (ADAS), a vehicle’s ignition on/off history, its cluster mileage display, operating history (e.g. airbags) and emergency data logging. It is also used to retain the settings for car navigation/audio and in industrial automation systems, it is used for data logging.

The BR24H-5AC series of I²C bus EEPROMs is available now for any systems requiring high reliability data retention over a long period of time.