Eight-channel ADC, DAC is in small but rugged enclosure 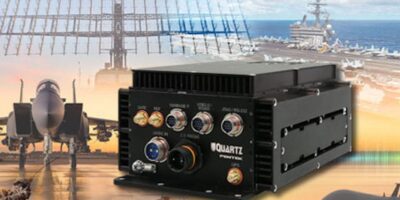 For signal intelligence and communications intelligence (sigint/comint) applications, the Quartz RFCoC Model 6350 is an eight-channel ADC and DAC system which Pentek has packaged in a rugged small form factor enclosure.

It is the latest product in Pentek’s Quartz RFSoC architecture. Due to popular demand, the company has introduced this Quartz RFSoC product specifically for use in harsh environments. “The Model 6350 is a self-contained system in a small form factor that allows for deployment in rugged installations,” explained Bob Sgandurra, director of Product Management at Pentek.

The QuartzXM eXpress module which is at the heart of the Quartz family, he continued, enables the company to quickly adapt to new form factors. The Model 6350 system provides a ruggedised, weather resistant system for space constrained or remote applications such as pods, unmanned aerial vehicles (UAVs) and antenna masts.

It is designed to the IP67 specification (Ingress Protection Code, IEC standard 60529) for dust and water immersion. The internal ‘I-beam’ construction creates a chassis that is both rugged and efficient for moving heat out of the box, says Pentek, making it suitable for deployment in the harshest environments and well matched to conduction cooled installations. The Model 6350 can also be used with an optional fan plate for desktop development.

The Pentek Quartz architecture embodies a streamlined approach to FPGA products, simplifying the design for reduced power and cost, while still providing some of the highest performance FPGA resources available today, says Pentek. The architecuture is supported by Pentek’s Navigator Design Suite tools, to develop and deploy software and FPGA IP for data and signal processing.

The front end accepts analogue IF or RF inputs on eight external SMA connectors with transformer-coupling to eight 4Gsamples per second 12-bit ADCs delivering either real or complex DDC samples. With additional IP-based decimation filters, the overall DDC decimation is programmable from 2 to 128. The eight DACs accept baseband real or complex data streams from the FPGA’s programmable logic. Each 6.4Gsamples per second 14-bit DAC includes a digital upconverter with independent tuning and interpolations of 1x, 2x, 4x and 8x. Each DAC output is transformer-coupled to an SMA connector.

The Navigator FDK includes the board’s entire FPGA design as a block diagram that can be graphically edited in Xilinx’s Vivado tool suite, with full source code and documentation. Developers can integrate their IP along with the factory-installed functions or use the Navigator kit to replace the IP with their own. The Navigator FDK Library is AXI-4 compliant, providing a well-defined interface for developing custom IP or integrating IP from other sources.

The Navigator BSP supports Xilinx’s PetaLinux on the Arm processors.