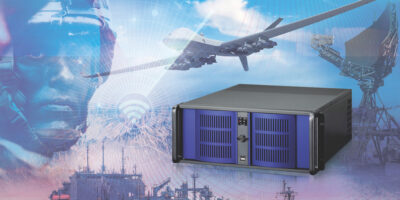 Designed to extend the recording capability for beamforming and radar applications, the Talon Model RTR 2828 is an eight-channel phase coherent, 4U 19-inch rackmount recorder with integrated RF tuners and ADCs from Pentek.

The rugged rackmount system is the latest addition to the company’s Talon series. It is designed to operate under conditions of vibration and extended operating temperatures. The Talon RTR 2628 accepts signals from eight antennae to provide eight channels of phase-coherent RF signal recording.  Each channel is tunable up to 6.0GHz and captures up to 80MHz of instantaneous bandwidth.

It has the dynamic range to pick up low-level signals, making it particularly suitable for spectrum monitoring applications that need to accurately interpret synchronised signals, says the company. Applications such as beamforming, direction finding, phased-array radars and multi-antenna diversity receivers can leverage its phase-coherent capabilities, said Rodger Hosking, co-founder and vice-president of Pentek.

Each input channel includes a 250MHz 16-bit ADC and an FPGA-based digital down converter with programmable decimations from two to 65536 for instantaneous bandwidths from 80MHz down to 3.0kHz. RF signals up to 6.0GHz in frequency can be tuned, sampled, digitally-down converted and streamed to disk in real-time at sustained aggregate recording rates up to 3.2Gbyes per second. Selectable system parameters are RF tuning frequencies, A/D sampling rates, DDC decimations and trigger settings.

The RTR 2628 is configured in a 4U 19-inch rack-mountable chassis, with hot-swap data drives, front panel USB ports, and I/O connectors on the rear panel. It is optimised for cooling and ruggedised to operate in challenging environments. Systems are scalable to accommodate multiple chassis’ to increase phase-coherent channel counts and aggregate data rates. All recorder chassis are connected via Ethernet and can be controlled from a single GUI either locally or from a remote PC.

The RTR 2628 includes as many as 32 hot-swappable SSDs to provide flexible storage capacities up to 122Tbyte. The 2.5-inch SSDs can be easily removed or exchanged during a mission to retrieve recorded data. Multiple RAID levels, including 0, 5 and 6, provide a choice for the required level of redundancy.

Configurations can be stored and recalled for single-click setup. The Signal Viewer provides a virtual oscilloscope and spectrum analyser to monitor signals before, during and after data collection. The C-callable API allows users to integrate the recorder control as a front end to larger application systems. Enhancements to the GUI support efficient configuration of the recording channels.

The data format used for storage follows the NTFS standard, allowing users to remove drives from the instrument and read the data using standard Windows-based systems, eliminating the need for file format conversion.

Pentek provides a Talon Recording System Simulator for evaluation of the SystemFlow software package. The trial package is available for download at the company’s website.