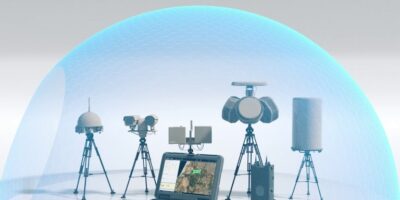 Elbit Systems meets demand for an affordable vehicular protection against hostile drones with the introduction of the ReDrone vehicular tactical system.

The vehicular configuration of the company’s operational anti-drone protection and neutralisation system is based on the field-proven and operational ReDrone system.  ReDrone vehicular tactical system detects, identifies and neutralises all types of drones (at any radio frequency) within a radius of several kilometers, providing any vehicle with a 360 degrees protection shield against hostile drones, says Elbit. Suitable for on-the-move or stationary operations, in day and night and in all weather conditions, the system is offered for all types of military and para-military vehicles.

Rapidly deployable, the ReDrone vehicular tactical system works automatically or manually, with no setup or operator control required. Its open architecture enables a full data flow to the vehicle’s control system and an effective interface with command and control centres, explains Elbit.

Upon detecting a hostile drone, the ReDrone vehicular tactical system neutralises all communications between the drone and its operator, including radio, video and GPS signals. The system is also capable of separating a drone’s signals from its operator’s remote control signals in order to locate and track each of them separately.

Elbit Systems UK (ESUK) holds four wholly-owned subsidiaries as well as two joint ventures. Over 500 personnel are employed by the ESUK companies in the UK, in high tech roles in the defence, aerospace and rail sectors. The two joint ventures were formed in order to deliver the Watchkeeper programme for the British Army and to supply and support three fleets of aircraft within the UK MoD Military Flying Training System (UKMFTS) programme. Elbit Systems UK was also recently selected by the UK MoD to provide the Morpheus battlefield management for the British Army.