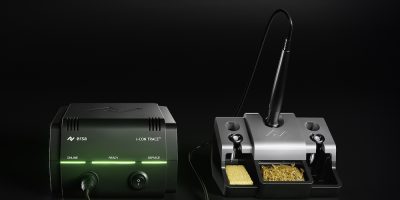 Traceability can also be ensured for manual soldering processes for the first time, said Ersa. The smart IoT soldering station records process information seamlessly and offers visual reports. It is possible to identify the causes of quality deviations at an early stage, isolate them and trace problems. The data collected can help to identify quality defects on manually created solder joints in returned assemblies.

The i-Con Trace soldering station, equipped with Wi-Fi, Bluetooth, with a network card as an option, solders with a heating power of 150W. It can be controlled using mobile end devices such as a notebook, tablet, or smartphone. In addition, a supervisor can centrally specify the parameters relevant for a soldering task. The Ersa Trace Cockpit operating software also makes it possible to assign a soldering task to a specific specialist. Actual temperature and other parameters are displayed and can be adjusted according to the project’s requirements.

The component, soldering tip, solder wire and flux are detected with a hand-held scanner. The soldering station is only ready to use when all factors correspond to the task. This eliminates potential errors, increases process reliability, and ensures complete traceability of the process data, explained Ersa.

The i-Con Trace soldering station can be used both as a standalone soldering station with pre-set parameters and integrated into MES (manufacturing execution system)-controlled production processes. The Trace app is designed for intuitive and safe operation. It is available free of charge for use with the Trace Cockpit and means that the soldering station can also be controlled using mobile devices such as a notebook, tablet, or smartphone in the company network.

The new, thermally optimised soldering tip range increases the efficiency of energy transfer by up to 30 per cent, said the company.

The Tip’n’Turn quick-change system, developed and patented by Ersa, allows the uncomplicated, quick, and safe change of the soldering tips offered in different shapes and sizes. The easy-to-use bayonet lock also provides a pre-tension, which permanently presses the soldering tip against the heating element. This ensures a stable temperature accuracy of +/- two degrees C. In addition, the long-life heating element and the soldering tip can be replaced independently of each other, to reduce operating costs and protect the environment, said the company.