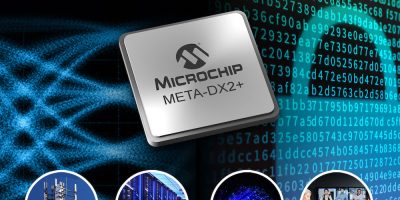 According to Alan Weckel, founder and technology analyst at 650 Group, the industry’s transition to a 112G PAM4 serial ecosystem for high-density routers and switches, mean that line-rate encryption and efficient use of port capacity become increasingly important. Microchip’s META-DX2+ Ethernet PHYs will enable MACsec and IPsec encryption, optimising port capacity with port aggregation and flexibly connect routing/switching silicon to multi-rate 400G and 800G optics, he said.

The PHYs are claimed to be the industry’s first product to integrate 1.6Tbits per second of line rate end-to-end encryption and port aggregation. They maintain a compact footprint during the transition to 112G PAM4 connectivity and meet demand for increased bandwidth and security in network infrastructure, led by AI / ML (machine learning) applications and the transition to 112G PAM4 connectivity beyond just cloud data centre and telecomms service provider switches and routers to enterprise Ethernet switching platforms.

The company has announced four META-DX2+ Ethernet PHYs powered by its Meta-DX retimer and PHY portfolio.

Microchip said that by offering a portfolio of footprint-compatible retimer and advanced PHYs with encryption options, it enables developers to expand their designs to add MACsec and IPsec based on a common board design and software development kit (SDK).

There is support for Ethernet, OTN, Fibre Channel and proprietary data rates for AI / ML applications.

Device variants are available with 48 or 32 Long Reach (LR) capable 112G PAM4 SerDes including programmability to optimise power versus performance.

According to Microchip more than 20 per cent board savings can be realised, compared to competing solutions that require two devices to deliver the same 1.6T gearbox and hitless 2:1 mux modes.

The META-DX2+ PHYs can be used with Microchip’s PolarFire FPGAs, the ZL30632 high-performance PLL, oscillators, voltage regulators, and other components that have been pre-validated as a system to help speed designs into production.

Microchip will be exhibiting the META-DX2L PHY device, at the Optical Internetworking Forum (OIF) booth at the European Conference on Optical Communication (ECOC) September 18-22, 2022, in Basel Switzerland.