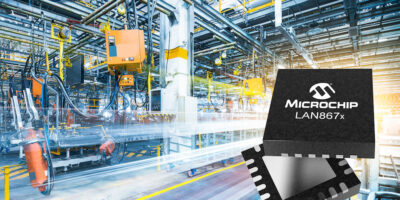 Believed to be the first Ethernet PHYs to implement the IEEE 10BASE-T1S single pair Ethernet technology standard, the LAN867x family can be used to connect devices in industrial networks, and enhance scalability and functionality, says Microchip.

With the LAN867x devices, all-Ethernet infrastructures in OT and IT systems can be expanded to the edges of the network. LAN867x devices eliminate the need for gateways to connect incompatible communication systems. The single pair of wires reduces cost, while the multi-drop bus architecture reduces the need for expensive switches and enhances scalability, according to Microchip. Several nodes can operate on the same bus line with high data throughput.

The LAN8670, LAN8671 and LAN8672 Ethernet PHYs are claimed to be the industry’s first designed and validated to the new 10BASE-T1S standard for single pair Ethernet released by IEEE. 10BASE-T1S addresses the challenges of creating all-Ethernet architectures for industrial applications such as process controls, building automation and consolidation of systems with multiple interconnection technologies. The configuration enables a multi-drop (bus line) topology, fewer cables, development on PCBs, with up to at least eight nodes and up to at least a 25m range.

All-Ethernet infrastructures simplify architectures by using well-known communication and security mechanisms. This reduces cost and risk when designing new systems, points out Microchip. Other advantages of Ethernet include use of the same protocol independent from physical layer speed, and operation within established security infrastructures and ecosystems.

“For industrial system architects and designers, interconnection of many different communication devices and technologies often is difficult and error prone,” said Matthias Kaestner, vice president, automotive, at Microchip. “Using 10BASE-T1S Ethernet simplifies these interconnections, enhancing interoperability and speed, which is critical in the industrial environment.”