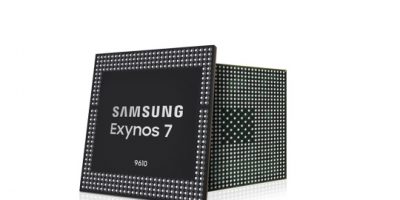 The Exynos 9610, built on Samsung’s 10nm FinFET process, elevates the multimedia experience in high-end smartphones with deep learning-based image processing for ultimate picture-taking experiences and slow motion video recording at 480 frames per second, to change the way the user engages with the mobile device, says Samsung.

For more enriched photo-taking and filming experiences, the Exynos 9610 couples vision and image processing with a neural network engine for more intelligently enhanced face detection, as well as single camera out-focusing and augmented low-light images. The advanced face detection feature enables the camera to recognise faces that are either not facing forward or partially covered with objects like hair or a hat. With smart depth sensing, bokeh or out-focused portraits can be taken with a single camera. Merging multiple frames, vision and image processing enhances the signal-to-noise ratio (SNR) and brightness that can improve pictures taken in low-light environments.

The Exynos 9610 also allows for 480 frames per second slow-motion support in full HD. Even while using a conventional two-stack image sensor, the Exynos 9610 is able to encode slow-motion video, thanks to its image signal processor (ISP) with improved performance by 1.6 times and more-than-doubled mobile industry processor interface (MIPI) speed. In addition, the processor uses a premium multi-format codec (MFC) that allows encoding and decoding up to 4K 120 frames per second.

Always-on sensing applications that require instant feedback, such as gesture recognition or context awareness, are enabled by an embedded Cortex-M4F-based low-power sensor hub, which efficiently manages the sensors in real-time without waking the main processor.

For always connected and seamless mobile broadband connection, the embedded all-network LTE modem supports Cat.12 3CA (carrier aggregation) at 600Mbits per second for downlink and Cat.13 2CA at 150Mbits per second for uplink. The processor is also packed with wireless communication technologies such as high-throughput 802.11ac 2×2 MIMO Wi-Fi, faster and longer range Bluetooth 5.0, and FM for radio.

The Exynos 7 Series 9610 is expected to be mass produced in the second half of this year.