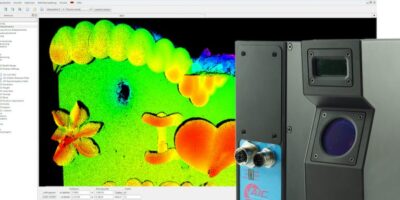 Image data is captured and transformed into point clouds on-board in the Saturn 3D sensor series, which is based on the laser triangulation principle.

The Saturn 3D sensors are integrated into the EyeVision software. For all applications where EyeVision is used – from profile evaluation to point cloud evaluation – the sensors can be used. Examples for 3D solutions with drag-and-drop programming are, for example, weld seam inspection, glue and sealant inspection, shape measurement, as well as bin-picking or pin-inspection.

The sensors’ hardware logic, with integrated FPGA and two ARM CPU cores, is able to process the captured image data in real time. A speed of up to 6kHz (or 6,000 3D lines per second) is possible, reports EyeVision Technology.

The FPGA offers different processes for the laser extraction, which the user can chose according to the application, such as centre of gravity, FIR or peak.

The sensors are based on Scheimpflug technology, which is claimed to guarantee sharp images of the laser on the sensor for the whole field of view. Another advantage is that all components are permanently fixed and an adjustment or new calibration is not necessary. Therefore the geometry is permanent, the defined working range of the scanner is permanently calibrated and the 3D points are already in world co-ordinates.

The Saturn 3D scanners are delivered with an application programming interface (API) for C/C++ for Windows as well as Linux, on x86 processors or Arm Linux.

For OEM customers, there is also Linux OS and the possibility to integrate customers’ own FPGA code.

To run the sensor, a GigE interface with PoE is available. When the sensor runs without hardware trigger only one cable is necessary. Additionally, there are interfaces for trigger or encoder input as well as digital I/Os, which can be controlled via the API.