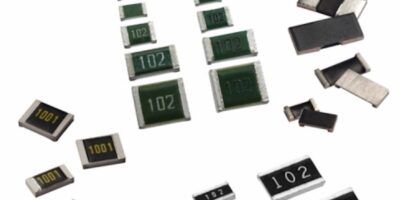 Passive components from KOA Europe are now available from Farnell. The distributor offers around 2,400 lines of in-stock products, for automotive, industrial and commercial use.

Farnell, an Avnet company offers the full range of passive components which are all in-stock, for delivery in Europe.

The RN73R range of passive components includes high reliability thin film resistors with temperature coefficient of resistance (TCR) down to ±5 ppm and a tolerance as low as ±0.05 per cent. KOA’s thin film resistors are suitable for high precision circuits such as control and monitoring in industrial, medical and automotive applications.

There is also the SG73 series of pulse-tolerant and anti-surge resistors for protecting electronic circuits against extreme pulses and surges, especially in I/O protection, snubber and gate drive circuits. It has a pulse handling capability up to 10 times higher than standard flat chip resistors, making the resistors suitable for use in automotive electronics, power supplies and motor control. Using these parts means that fewer parts can be used for “substantial space savings” says Farnell.

Wide terminal resistors for high power density make up the WK73R series. They feature wide terminals on the long side of the resistor allowing for up to three times the power rating of a similar sized part with conventional terminations. The closeness of the terminals significantly reduces thermal stress between the resistor and the PCB, says Farnell. These parts are suitable for high power density circuits and gate drives used in environmental and industrial applications.

There are also current sensing resistors in the TLR series. These resistors offer the high reliability and performance required for power control circuits such as motor control units, DC/DC converters, CPU current sensing and pulse applications. The special trimming eliminates hotspots for a reliable device with low parasitic inductance. The TLR series provides up to 5W (100A) rating with corrosion and heat resistance.

The complete KOA product range is now available from Farnell in EMEA and element14 in APAC.