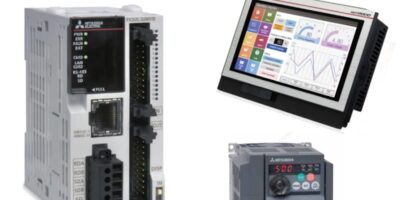 Distributor, Farnell, says it is increasing the depth and breadth of its industrial automation and control range with the introduction of variable speed drives, programmable logic controls (PLCs) and human machine interfaces (HMIs) from Mitsubishi Electric.

The manufacturer’s automation and control products are suitable for a wide range of applications including smart manufacturing driven by the industrial IoT (IIoT) and Industry 4.0. It is available for next-day delivery across Europe, to reduce downtime and production losses and allow system designers to introduce automation technology to develop new machinery and equipment faster.

There is the FR-D700 frequency inverter which is a compact, micro-drive offering simple, timesaving start up, says Farnell and increased energy savings with its Optimum Excitation Control (OEC) function. It also has a high overload capacity of 200 per cent.

There is also the FR-E700 SC frequency inverter, which is an economical inverter for textile machines to door and gate systems and material handling systems.

Mitsubishi Electric’s HMIs allow users to control industrial automation devices using touch-sensitive graphic displays. For example, the GOT2000 series features multi-touch gestures for intuitive operation. Objects may be enlarged, scrolled or flicked and critical operations can be controlled by designating two touch points. Models in the series are available with a range of screen sizes from 3.8 inch to 15 inch.

Mitsubishi Electric is one of the world’s largest manufacturers of PLCs. Farnell now offers the FX3 series, consisting of the FX3S, FX3G and FX3U family of products. They are designed for small to medium-sized control and positioning tasks requiring a combination of 10 to 384 inputs and outputs for industrial control and building services applications.

There is also the FX5 series with a redesigned high speed system bus and an array of built-in features and enhanced security functions.