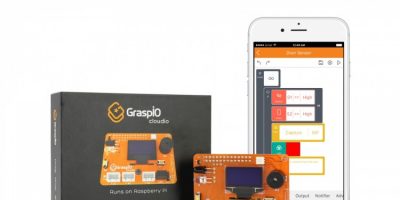 A Raspberry Pi expansion board with a mobile platform for end to end IoT development and deployment has been introduced by Farnell element14. The GraspIO Cloudio is a Raspberry Pi add-on board with drag and drop programming interface on iPhone, iPad, Android.

The GraspIO Cloudio incorporates voice assistant capabilities, IFTTT (If This Then That) Integration, IoT cloud service, sensor monitor and dashboard, custom notifications with image and video and one tap multi-board upload.

Steve Carr, global head of marketing at Premier Farnell and Farnell element14 believes: “The versatility of GraspIO Cloudio, along with its ease of use will make it popular with makers and innovators in a wide range of application environments. Cloudio, when combined with a Raspberry Pi, is a full stack IoT platform meaning that you can programme IoT devices simply and quickly with drag and drop programming on a mobile app,” he says. The built-in hardware facilities and access to application software will make help developers of projects involving voice, motion, imaging and cloud interaction.

Potential applications for the Cloudio include voice control. Users can create voice assistants using the inbuilt speech recognition feature to control Cloudio from a smartphone. Customised voice commands can be set to control lights, fans, switches, locks, and more, from anywhere.

It can also be used for speech output. Projects can be made to “talk” with the Speak block and the Raspberry Pi’s own headphone jack. Users can create real-time speech notifications and custom messages, or play recorded audio from the board.

For IFTTT Integration, users can create simple applets that use Cloudio’s features as both triggers and actions for a new connected experience. Another use is deploying Cloudio’s on-board or external sensors as an edge device to design intelligent and responsive sensor monitoring projects. Real-time sensor graphs can be viewed on a mobile device and data can be exported for IoT analytics.

A Raspberry Pi or USB camera can be interfaced effortlessly with the in-application camera block to capture images and videos or to create GIFs and time-lapse videos. Users can add email, image, and video notifications.

Cloudio is designed and developed by Grasp IO Innovations and exclusively manufactured and distributed by Farnell element14. GraspIO aims to make the world of IoT and robotics less technical and more practical for learning, prototyping, and play.  It is available to buy from Farnell element14 in Europe, element14 in APAC and Newark element14 in North America.