Farnell gets ahead with Raspberry Pi Build HAT 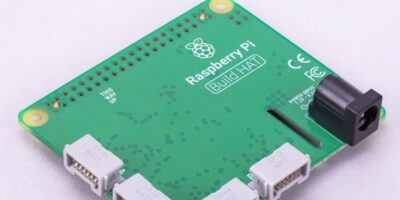 The Build HAT and the Lego building system can be used to create robots, cars, games, a smart house and even an egg-laying chicken, reports Farnell. The Raspberry Pi Build HAT is the second Raspberry Pi product to be based on the RP2040 microcontroller. The Lego Maker Plate is available separately from Lego retailers to integrate Raspberry Pi computers into the building system.

The Build HAT is compatible with the most recent generation of Lego Technic motors and with sensors included in the Lego Education Spike Prime portfolio. The Build HAT is easy to use from Python on the Raspberry Pi, Farnell adds.

The Raspberry Pi 48W Build HAT power supply is the official one for use with the Raspberry Pi Build HAT. Key specifications include a 110 to 240V AC input and a 8.0V DC, 6.0A output. There is also a 1.5m connecting cable.

Romain Soreau, head of single board computing at Farnell, said: “We are delighted to help inspire future creators by providing an expanded range of Raspberry Pi products which provide an introduction into electronic project design.”

The Raspberry Pi Foundation is a UK-based charity that works to put the power of computing and digital making into the hands of people all over the world. Its goal is to provide an easy-to-use maker experience for beginners, which is flexible enough for advanced users. Raspberry Pi provides and affordable SBC system for education and to develop industrial automation and control, and personal computing products.

Farnell is the longest standing Raspberry Pi partner and has sold more than 15 million units to date. Farnell stocks the complete range of Raspberry Pi SBCs including the recently launched Raspberry Pi Pico. Customers use it to build a range of devices for professional, commercial, education or home use. A diverse ecosystem of accessories includes cases, power supplies, micro-HDMI cables and the Raspberry Pi high resolution camera.

The Raspberry Pi Build HAT and power supply will be shipping in October from Farnell in Europe, element14 in APAC and Newark in North America.