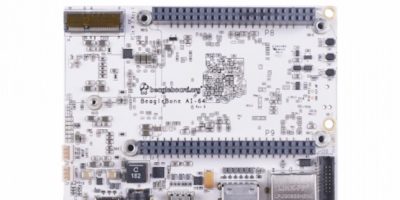 BeagleBoard.org’s first 64bit open hardware single board computer (SBC) the BeagleBone AI-64 SBC is available from stock from Farnell (in EMEA, Newark in North America and element14 in APAC).

It is designed for building embedded applications and brings a complete artificial intelligence (AI) and machine learning system to developers, said Farnell.

“We believe this board will capture the imaginations of designers and empower them to build complete and powerful AI systems,” said Christine Long, CEO of the BeagleBoard.org Foundation. She continued that it is offered at “an extremely competitive price point, we are excited about the new applications that BeagleBone AI-64 will enable for new and experienced users.”

The SBC is described as a milestone for BeagleBoard.org by Jason Kridner, president of the BeagleBoard.org Foundation board. “With multiple SuperSpeed USB ports, familiar BeagleBone cape expansion headers and desktop-capable performance, the general purpose embedded applications for this board are endless, with eight TOPS [terra operations per second] neural network performance accessible through familiar Python libraries to boot.”

In addition to the TDA4VM, there are vision processing accelerators with an image signal processor (ISP) and multiple vision assist accelerators including DMPAC, dual 64-bit Arm Cortex-A72 microprocessors, six Arm Cortex-R5F MCUs at up to 1.0GHz, memory subsystem with up to 8Mbyte of on-chip L3 RAM with ECC and coherency and 12 multi-channel audio serial port modules.