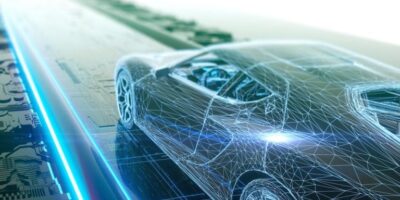 The signs are everywhere that the self-driving car revolution is about to shift into full gear. Automotive companies are joining up with tech giants like Google and Uber, as well as prominent start-ups, to develop the next-generation autonomous vehicles that will alter our roads and throughways and lay the framework for future smart cities. They’re harnessing technological advances such as machine learning, the Internet of Things (IoT), and the cloud in order to accelerate this development.
More significantly, autonomous vehicles will advance the industry disruption already set in motion by popular ride-sharing services like Uber and Lyft. The pieces are coming together to create a world where intelligent and driverless vehicles become the future of transportation.

Eventually, all self-driving cars will employ a combination of sensors, cameras, radar, high performance GPS, light detection and ranging (lidar), artificial intelligence (AI), and machine learning to achieve a level of autonomy. Connectivity to secure and scalable IoT, data management, and cloud solutions are also important to the mix, as they provide a resilient and high performance foundation on which to collect, manage, and analyze sensor data.

The rise of the connected vehicle has far-reaching societal implications, from environmental benefits to improved safety. Fewer cars on the road also means a reduction in greenhouse gas emissions, leading to lower energy consumption and better air quality.

For both self-driving cars and smart roadway systems, endpoint telemetry, smart software, and the cloud are essential enablers. The onboard cameras and sensors in autonomous vehicles collect vast amounts of data, which must be processed in real time to keep the vehicle in the right lane and operating safely as it heads to its destination.

Cloud-based networking and connectivity is another important part of the mix. Autonomous vehicles will be outfitted with onboard systems that support machine-to-machine communications, allowing them to learn from other vehicles on the road in order to make adjustments that account for weather changes and shifting road conditions such as detours and in-path debris. Advanced algorithms and deep learning systems are central to ensuring that self-driving cars can quickly and automatically adapt to changing scenarios.

Beyond the specific components, such as scalability of cloud computing infrastructure and intelligent data management, there is a need for redundancy of mission critical systems, including power sources. There are previously released redundant battery solutions available, like the LTC3871 which works with two batteries that have different voltage ratings, such as a 48 V Li-Ion and 12 V lead-acid battery. However, most of these existing solutions do not provide redundancy for same battery voltages, like two 12 V, 24 V, or 48 V batteries. Up until now, that is.

Clearly there is a need for a bidirectional buck-boost dc-to-dc converter that can go between two 12 V batteries. Such a dc-to-dc converter could be used to charge either battery and allow both batteries to supply current to the same load. Furthermore, if one of these batteries should fail, that failure needs to be detected and isolated from the other battery, so that the other battery continues to provide power to the load without any disruption. The recently released LT8708 bidirectional dc-to-dc controller from Analog Devices solves this critical function of allowing two batteries with the same voltage to be hooked up by utilizing the LT8708 controller.
A Single Bidirectional IC Solution

The LT8708 is a 98% efficient bidirectional buck-boost switching regulator controller that can operate between two batteries that have the same voltage, which is ideal for redundancy in self-driving cars. It can operate from an input voltage that can be above, below, or equal to the output voltage, making it well-suited for two 12 V, 24 V, or 48 V batteries commonly found in electric and hybrid vehicles. The LT8708 operates between two batteries and prevents system shutdown should one of the batteries fail. This device can also be used in 48 V/12 V and 48 V/24 V dual battery systems.

The LT8708 uses a single inductor and operates over an input voltage range from 2.8 V to 80 V while producing an output voltage from 1.3 V to 80 V, delivering up to several kilowatts of power depending on the choice of external components and number of phases. It simplifies bidirectional power conversion in battery/capacitor backup systems that need regulation of VOUT, VIN, and/or IOUT, IIN, both in the forward or reverse direction. This device’s six independent forms of regulation allow it to be used in numerous applications.

The LT8708-1 is used in parallel with the LT8708 to add power and phases. The LT8708-1 always operates as a slave to the master LT8708, can be clocked out-of-phase, and has the capability to deliver as much power as the master. Up to 12 slaves can be connected to a single master, proportionally increasing the power and current capabilities of the system.

Forward and reverse current can be monitored and limited for the input and output sides of the converter. All four current limits (forward input, reverse input, forward output, and reverse output) can be set independently using four resistors. In combination with the direction (DIR) pin, the chip can be configured to process power from VIN to VOUT or from VOUT to VIN, ideal for automotive, solar, telecom, and battery-powered systems.

The LT8708 is available in a 5 mm × 8 mm, 40-lead QFN package. Three temperature grades are available, with operation from –40°C to +125°C for the extended and industrial grades and a high temperature automotive range of –40°C to +150°C. Figure 1 shows a simplified LT8708 block diagram. 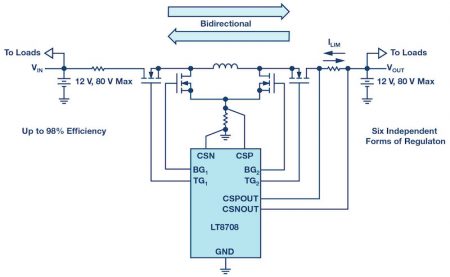 Complete Solution
The block diagram in Figure 2 shows the other parts required to complete the circuit for dual battery redundancy in an automotive application. As shown, the LT8708 works with two LT8708-1 parts to form a 3-phase solution design that can deliver up to 60 A in either direction. Additional LT8708-1 devices can be added for higher power applications up to and exceeding 12 phases. The AD8417 is a bidirectional current sense amplifier that senses the current flowing into and out of the batteries. And when this current exceeds a preset value, the LTC7001 high-side NMOS static switch driver opens the back-to-back MOSFETs to isolate either battery from the circuit.

The LTC6810-2 monitors and controls the Li-Ion battery. It accurately measures the battery cells with a total measurement error of less than 1.8 mV. Connecting multiple LTC6810-2 devices in parallel to the host processor will create additional redundancy for monitoring other voltages within the circuit. The LTC6810-2 has an isoSPI™ interface for high speed, RF immune, long distance communications, and it supports bidirectional operation. The device also includes passive balancing with PWM duty cycle control for each cell and the ability to perform redundant cell measurements.

Control Overview
The LT8708 provides an output voltage that can be above, below, or equal to the input voltage. It also provides bidirectional current monitoring and regulation capabilities at both the input and the output. The ADI proprietary control architecture employs an inductor current-sensing resistor in buck, boost, or buck-boost regions of operation. The inductor current is controlled by the voltage on the VC pin, which is the combined output of six internal error amplifiers, EA1 to EA6. These amplifiers can be used to limit or regulate their respective voltages or currents as shown in Table 1.

In a common application, VOUT might be regulated using EA4, while the remaining error amplifiers are monitoring for excessive input or output current, or an input undervoltage condition. In other applications, such as a battery backup system, a battery connected to VOUT might be charged with constant current (EA6) to a maximum voltage (EA4) and can also be reversed, at times, to supply power back to VIN using the other error amplifiers to regulate VIN and limit the maximum current. See the LT8708 data sheet for additional information on this subject.

Conclusion
The LT8708-1 brings a new level of performance, control, and simplification to same voltage dual-battery dc-to-dc automotive systems. Whether using it for energy transfer between two power sources for redundancy, or for backup power in mission critical applications, the LT8708 allows users the ability to operate from two batteries or supercapacitors that have the same voltage. This capability allows automotive systems engineers to help pave the way for new advancements in automotive electronics, enabling cars to be safer and more efficient.

Bruce Haug [bruce.haug@analog.com] received his B.S.E.E. from San Jose State University in 1980. He joined Linear Technology (now a part of Analog Devices) as a product marketing engineer in April 2006. Bruce’s past experience includes stints at Cherokee International, Digital Power, and Ford Aerospace. He is an avid sports participant.