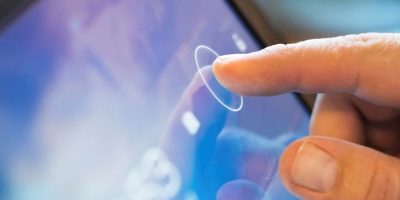 The display is the first thing that the system user sees and the last thing that the system designer thinks about. A sweeping generalisation but so often true. The user’s perception of the system will be completely based on the information it provides and how it is presented. Yet system designers typically choose the display late in the design process. Their focus is often on the choice of processor, operating system and writing the software. Thinking about how the system is going to be presented to its user at the start allows much more flexibility. Let’s explore five specific questions designers should be asking when they choose a display for their system.

Firstly, don’t be constrained by the relatively limited catalogue options that the major display manufacturers offer. Start from a blank piece of paper and decide what size you’d really like – if you choose the right supplier you will able to achieve the exact size you require, at the right price.

While a standard product may appear to be the best value for money, a custom or customised display is often a better and more cost effective option.  For example, in many cases we can cut a display to size which can avoid having to increase the case size or compromising the way information is presented to fit a smaller than ideal screen.  A display that’s too large can bring hidden costs in terms of a bigger case, which can cost more to buy, ship and store and can often use more power.

It is also possible to remove unwanted elements from a custom or customised display. You can choose how many backlight LEDs you need – saving cost and reducing power. You can specify a simpler and cheaper graphics IC, add or remove performance enhancement films etc. to create a screen that delivers exactly what your application requires – no more and no less.

So my first piece of advice to the display specifier is not so much dream big, as to be demanding. Figure out the size that works for your system, then find a supplier that offers the flexibility and will deliver what you need. 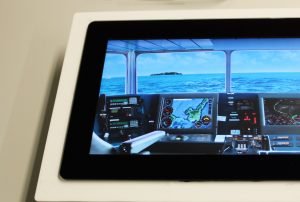 The resolution of the display depends on the character of the information to be presented. Is it purely text, icons or graphical? Will it include video? Is there to be a touch interface, and if so, how many options is the user to be offered at any one time, and how much information needs to be presented to help them make their choice.

It’s extremely hard to visualise screen appearance in the abstract – the best way is to obtain samples of the target displays and load up the interface. Platforms like DX from Anders offer pre-integrated motherboards and displays which are shipped working with popular operating systems and processors. Loading your application onto these platforms is quick and simple and you can easily make changes and even try different screen sizes to make an informed decision.

Having chosen the display size and resolution, we move on to thinking about ergonomics – how will the system be used? Will the user be standing in front of the display or will they need to look at the screen from an oblique angle?

Although display data sheets give a figure for viewing angle assessing it can actually be quite subjective. Whether or not a display can be read from a specific angle can depend on the light levels, the size of the text or graphics being viewed and the operator’s eyesight. With a handheld unit, generally the operator will move the instrument so that they can clearly read the display. With a bench unit, they may be forced to view the display from an awkward angle, looking at the instrument from the side or from above.  When we work with customers on this issue, we always try to understand how the equipment will be used and where the operator will be sitting.

One of the best technologies for achieving wide viewing angles is IPS (In-Plane-Switching). These displays offer viewing angles in excess of 85˚ in all directions allowing them to be used in either landscape or portrait orientation, without penalty. IPS technology offers a lot of other advantages too – better contrast, a deeper black, and a very sharp image. It really is a great looking display technology.

If you’re committed to a standard TN there are still a number of things that you can do to improve viewing angle. A recently introduced technology is an optical film that redirects light improving viewing angles. Applying an o-film gives you typically an additional 10 degrees of viewability in any direction, at the price of a slight loss of sharpness in the image. Adding ‘moth-eye’ films into the cavity between display and cover lens reduces reflections which can improve viewability especially from oblique angles.

Question 4 – in what environment is the display to be used?

Having considered the user, we need to think about the environment in which the display will be used. You need to design for the worst case. An instrument may work well indoors or in low light, but users won’t thank you if they can’t read the screen in bright sunlight. In fact sunlight is a very long way from being the display designer’s friend, as anyone who has ever strained to read an ATM screen on a sunny day will know.

The single best measure you can take to improve readability of a display in sunlight (or any other environment) is to use optical bonding between the cover glass and the display. It eliminates the internal reflection between the glass layers in the display by using optical clear adhesive that matches the indices of refraction at the boundaries between glass and air. This increases display contrast so that it can be read more easily even in bright conditions. Even when switched off, an optically bonded display will appear black rather than a murky grey. Eliminating internal reflections between the different layers of the display improves readability no end.

There are other things you can do, for example increase the brightness of the backlight, but this comes with a penalty. The backlight will then draw more power which will reduce battery life and increase the heat generated in the display.

Question 5 – will it be exposed to extreme temperatures?

Not only are displays hard to read in bright light, but sunlight also causes extra heating. Fitting a UV resistant overlay and using UV adhesives are always good measures to take, but these are really the starting point of designing for a sunny environment.

Thermal management needs to be carefully considered with a display that is likely to catch the sun. A system being used outdoors usually needs to be sealed, which precludes the use of forced cooling like fans, as well as the provision of apertures. The only solution really is to fit a heat sink, which will increase the size and weight of the system.

Unless the heat sink really is massive, then some degree of heating is inevitable. The components need to be specified to handle the anticipated maximum temperature. The two material items that are particularly affected are the polarizers and the liquid crystal (LC) fluid itself. Standard polarizers have a temperature range of -20 – +70°C but extended temperature range solutions with -30 – +85°C are available.

With the LC fluid, the specification to look out for is the ‘clearing point’. When the fluid gets too hot, it loses the ability to manipulate light causing the screen to go black. You’ll most likely have seen this phenomenon on your smartphone. It reverses itself when you return to a cooler environment. Standard LC fluids have a ‘clearing point’ of 70°C, but for displays where heat is an issue materials with higher clearing points are available. 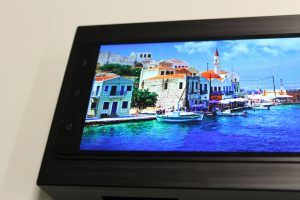 Choosing the display early in the design cycle makes sense. If you choose the display early, alongside the processor, your options will be wide open. I have worked on a number of projects where the wrong display was selected at the outset – for example the display life was shorter than the design life of the system. It is usually possible to resolve these situations, but invariably there is a penalty often in terms of cost and time. By making the right decision at the outset, you can come up with a solution that delights the user at the optimum cost and power consumption for the design brief. The decision is never an easy one though – and it does pay to involve a display partner with consultants who will think about your system in detail and recommend best in class solutions to address your needs.