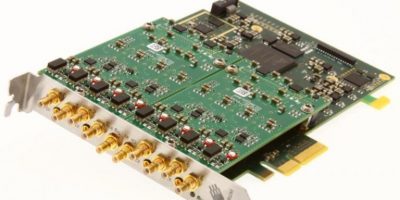 Spectrum Instrumentation has added five models to its general purpose M2p.59xx series of PCIe 16-bit digitiser cards. They extend the performance range by increasing the maximum sampling rate from 80 to 125Msample per second. The increased sampling rate, together with higher overall bandwidth, enables the cards to capture a wider range of electronic signals, says Spectrum. It makes them suitable for use in applications where signals in the DC to 50MHz frequency range need to be acquired and analysed with speed and accuracy.

Based on 16-bit ADC technology, the M2p-596x series includes models that provide one, two, four or eight input channels. Multi-channel models each have their own ADC and signal conditioning circuitry to allow fully synchronous acquisitions on all the inputs. Importantly, the high-resolution 16-bit ADCs deliver 16 times more resolution than digitisers using older 12-bit technology and 256 times more resolution than what is available from digital scopes that commonly use 8-bit ADCs. The extra resolution improves measurement capabilities and dynamic performance. It delivers a higher signal-to-noise ratio (SNR), better spurious free dynamic range (SFDR) and less distortion than 12- or 14-bit products, claims Spectrum Instrumentation.

The half-length PCIe card offers a full set of digitiser features. Each channel has its own programmable input amplifier with ranges between ±200mV and ±10V, programmable input offset for unipolar measurements, programmable input termination of 50-Ohms and one-MOhm and an integrated calibration circuit. Models are available with up to eight single-ended and up to four differential channels.

There is a variety of signal triggering techniques, an on-board memory of 1.0Gbyte and intelligent acquisition modes, such as multiple recording, gated sampling or ABA (the combination of fast and slow continuous acquisitions). At just 167mm long, the multi-function digitisers fit into much smaller PC systems for compact OEM projects.

A PCIe x4 lane interface enables lightning fast, data streaming at rates of more than 600Mbyte per second or more than 80Msample per second continuous streaming for four channels. The cards also support Spectrum’s SCAPP software option – the Spectrum CUDA Access for Parallel Processing – to digitise, process and analyse electronic signals. SCAPP allows a CUDA-based GPU to be used directly between any Spectrum digitiser and the PC. The data is passed directly from the digitiser to the GPU, where high-speed parallel processing is possible using its multiple (up to 5000) processing cores. Fast data streaming and SCAPP can improve overall measurement speeds and free up vital PC resources, adds Spectrum, for advanced signal processing and imaging.

For high-density, multi-channel acquisitions, up to 16 digitiser cards can be synchronised using Spectrum’s Star-Hub technology. Star-Hub allows systems to be built with up to 128 channels, all sharing a common clock and trigger in one single chassis. For synchronisation with other external equipment, clock and trigger inputs and outputs are also standard. Further flexibility is provided via four individually programmable, front panel connectors that offer additional trigger inputs, status outputs, synchronous digital input lines, asynchronous I/O or a reference clock input for an integrated time stamping unit.

The software design of the new cards is based on Spectrum’s general driver API. More than 400 different products share this common driver library allowing easy switching from slow to fast products and combining PCIe, PXIe or Ethernet/LXI products with one common software interface. A complete software development kit (SDK) based on Windows and Linux is included in the delivery. Drivers and examples for nearly every programming language on the market are included, adds Spectrum. The current SDK includes C, C++, C#, Delphi, VB.NET, J#, Python, Java, LabVIEW, MATLAB and LabWindows/CVI