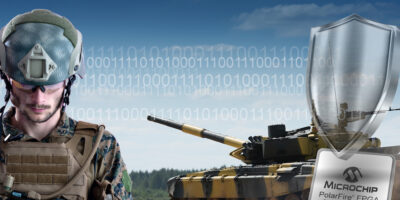 Cybercriminals target the FPGAs in mission-critical and other high-assurance systems to extract critical program information (CPI), says Microchip Technology as it introduces the DesignShield development tool that further helps prevent this information from being extracted for malicious purposes.

The tool advances the state of bitstream protection mechanisms and provides another defensive layer in ensuring that deployed systems behave as intended and are safe from counterfeiters and their threat to a developer’s design investments and brand reputation, said Bruce Weyer, vice president of Microchip’s FPGA business unit.

The DesignShield tool was created to protect developers of aerospace, defence and other high-assurance systems from attempts to acquire an FPGA’s bitstream from the fielded system. It deters reverse-engineering of the bitstream, which can often include CPI, by obscuring its logical equivalent using a combination of logic and routing-based encryption techniques. This improves design security and integrity while reducing system corruption risks, and reduces the possibility that custom code, intellectual property, or critical information is used by non-authorised agents.

The DesignShield tool is available under license as part of Microchip’s Early Access Program, which enables customers to begin designing with FPGA devices and design tools ahead of broader commercial availability.

Based on non-volatile flash memory, Microchip says its FPGAs offer inherently better security than SRAM-based alternatives that expose sensitive bitstream data on every power cycle. The FPGAs also include integrated security features that prevent overbuilding and cloning, protect design IP, and provide a root of trust, secure data communications and anti-tamper capabilities. The company’s layered approach to security includes licensed, patented differential power analysis (DPA) protection, built-in certified security functions, built-in tamper detectors, and supply chain assurance that the FPGA is authentic. Security requires layers and not having a single wall to break through. DesignShield adds another layer that protects the authenticity, integrity, and confidentiality of a design.