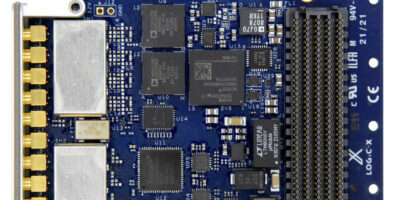 The developer of adaptable compute acceleration platforms and sensor processing module said the card can be incorporated as-is within an embedded system or used during the development and prototyping of an SoC or mixed-signal ASIC. It can also be supplied with a reference design to accelerate development programmes.

The LVDS pin-out is configured so that the LXD31K4 will work on most ‘partial implementations’ of the high pin count connectors on Xilinx development boards as well as Logic-X’s FPGA FMC carrier boards. Using LVDS for data interfaces means users can easily integrate the card with an FPGA without having to purchase and embed JESD204B-compliant interface cores for converters and receivers. This approach shortens system development / prototyping time and reduces risk within the overall project, said Logic-X.

All eight channels have 16-bit accuracy and the board is available with either a DC or an AC-coupled front end which determines the bandwidth an input channel can accept as well as the bandwidth the card can produce on an output channel.

A two-in-two-out version of the FMC is also available. The LXD31K2 boasts 16-bit resolution, also uses LVDS and can be ordered with a DC or AC front end.

Other options for both the LXD31K4 and the LXD31K2 are standard or industrial temperature ranges and uncoated or coated with a MIL-I-46058-C conformal coating versions.

The reference design supplied with both FMCs comprises a Vivado IP integrator project and IP cores that can be controlled from a software application over Ethernet or PCI Express (PCIe).

The LXD31K4 and LXD31K2 are both sampling now with volume availability predicted for Q4 2021.