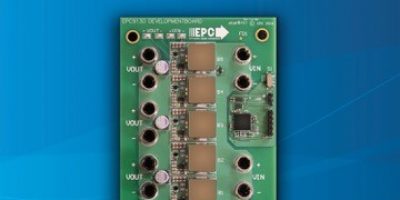 The EPC9130 48 to 12V,  non-isolated, fully regulated five-phase development board has 12A per phase and a maximum output current of 60A, making the board capable of over 700W.

The EPC9130 provides high-power density exceeding 1250W per cubic inch, and over 96 per cent efficiency, adds EPC. Each of the five phases uses two 100V EPC2045 eGaN FETs in a half-bridge configuration with a uPI Semiconductor, up1966A gate driver. The PWM signals to the gate drivers are fed by an on-board dsPIC33 microcontroller from Microchip.

According to EPC, the board contains all critical components and layout for optimal switching performance – with a bill of materials of less than $0.06 per W in volume.

Emerging computing applications, such as multi-user gaming systems, autonomous cars, artificial intelligence, and cryptocurrency mining , demand more power in much smaller form factors. In addition, the server market is expanding with the same demands. The EPC9130 significantly improves the power density while reducing the size and cost of the 48 to 12V DC/DC converters needed for these applications. The DC/DC system has a power density greater than 1250W/in3, and an efficiency greater than 96 per cent, both records for this type of conversion, claims EPC.

A quick start guide contains set up procedures, circuit diagram, performance curve, and bill of material and is provided online. A video discussing the performance of the EPC9130 is also available online.