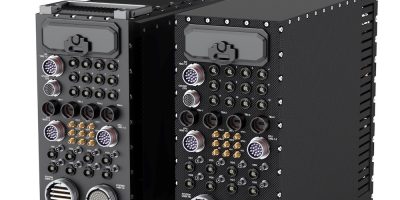 Single board systems and chassis with SOSA (Sensor Open Standard Architecture) and MOSA (modular open standards approach) for electronic systems based upon Thunderbolt 4 and 100Gbit Ethernet interoperability have been announced by General Micro Systems (GMS).

The company has introduced a family of 3U and 6U OpenVPX computer boards, peripherals and ATR-style chassis for use in US Army ground, air, communications and weapons systems.

The X9 Venom family of 21 products will be available by early 2023, starting with the 3U and 6U single board computers (SBCs) based upon Intel and Nvidia processors and general purpose graphic processor units (GPUs). All products follow ANSI/VITA 65 standards and meet the Department of Defense (DoD) requirement for MOSA electronic systems and are IEEE 1101.2 conduction-cooled. X9 Venom products are also SOSA-aligned and ready to meet C4ISR (command, control, communications, computers, intelligence, surveillance and reconnaissance) or electronic warfare Modular Open Suite of Standards (CMOSS). Increasingly, these two standards are requirements in US Army programmes and platform upgrades.

The OpenVPX standard is a common upgrade from widely deployed legacy VME-style boards and chassis. Unlike VME, OpenVPX modules have limited space for electronics and I/O signals, fewer functions per slot requiring more boards in the chassis which means complex wiring and requires more power and generate more heat.

“Each of Venom’s 3U and 6U single-board systems have more functionality, more memory, higher performance processors, and much greater amounts of data I/O bandwidth – up to 455Gbits per second – than any competing OpenVPX vendor,” said Ben Sharfi, CEO and chief architect at GMS.

According to Sharfi, GMS accomplishes what was once deemed impossible by “folding” a larger computer board with many functions into multiple 3U-sized boards that fit into either one or two 3U slots. Patented GMS connector technology routes high speed PCI Express 4 signals (16Gbits per second) between the stacked boards without signal degradation. Traditional PCI Express and Ethernet data is sent to the backplane but high-speed I/O, including 100Gbit fibre optic data and Thunderbolt 4 signals, is sent to the front panel.

The 3U and 6U ATR-Plus chassis are designed to handle both backplane and front panel copper and fibre data. The 6U-sized X9 Venom boards are all single slot but essentially take the three-board X9 architecture and place it onto a single 6U board. All boards or chassis use GMS patented clamshell heat sinks, wedgelocks, RuggedCool or Diamond RuggedCool hot spot cooling and stiffeners. They also all have LightBolt front panel connectors for copper, fibre, or fibre with up to 100W Power Delivery.

With Venom single board systems, Thunderbolt 4 ports and 100Gbit Ethernet allow data movement between cards and outside of the ATR box without loading up the limited bandwidth OpenVPX backplane. In addition, externally connected Thunderbolt 4 systems provide modularity, scalability and an upgrade path without having to modify an OpenVPX chassis.

The 3U processor modules use either Intel Xeon W Core i7 or Intel Xeon D Ice Lake as a single board system, or as network-centric with two to six RDMA 100GbE and two to four Thunderbolt 4 ports, or as network-attached storage with up to 48Tbyte VROC RAID storage and two to four Thunderbolt 4 ports plus two to four 100GbE ports with Intel iWRAP and RoCEv2 on Ice Lake D systems. All processor modules have multiple low-speed I/O plus legacy I/O options, along with optional Nvidia GPUs.

CPUs are either Intel Xeon W Core i7 or Intel Xeon D Ice Lake, or as network-centric with four to six RDMA 100GbE and two to four Thunderbolt 4 ports, or as network-attached storage with up to 48Tbyte VROC RAID storage and two to four Thunderbolt 4 ports plus two to four 100GbE ports with Intel iWRAP and RoCEv2 on Xeon D systems. All processor modules have multiple low-speed I/O plus legacy I/O options, along with optional Nvidia general purpose GPU.

The GMS ATR-Plus and ATR-Max chassis come in aluminium alloy or in carbon fibre to save up to 30 per cent in weight. Per-slot heat pipe cooling improves reliability and extends operating range, said GSM.

All chassis front panels are configurable and include high- and low-speed copper connectors plus fibre connectors for internal backplane and card front panel wiring. 3U chassis have six or eight slots, a removable 4-SSD canister for data storage and two slots for dual 1000W smart power supplies. 6U chassis include two canisters for removable storage and eight slots, with two reserved for power supplies. All Thunderbolt technology-equipped chassis offer 100W Power Delivery over fibre.