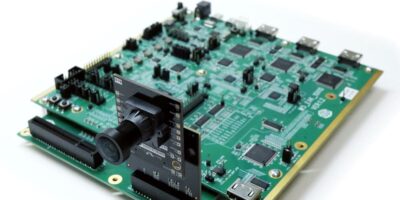 The OmniVision’s OX03C10 is claimed to be the only automotive image sensor available that combines a large 3.0 micron pixel, high dynamic range (HDR) of 140dB for minimised motion artefacts, and the highest LED flicker mitigation (LFM) performance. The collaboration allows camera designers to process images captured by two image sensors with full HDR and LFM, using a single Geo CVP.

Using the GW5’s ability to process the captures from two image sensors simultaneously, with the HDR and LFM performance of OmniVision’s OX03C10 allows SVS camera designers to get the highest possible image quality without the added system bill of materials cost, complexity and power consumption of two CVPs, explains Geo.

The collaboration allows automotive designers to create the highest quality viewing cameras, across all lighting conditions, and in the presence of flickering LEDs from headlights, road signs and traffic signals, says the company.

This sensor’s integration of OmniVision’s HALE (HDR and LFM engine) combination algorithm provides the highest HDR and LFM performance simultaneously, claims Geo and the Deep Well dual conversion gain technology significantly reduces motion artefacts. Additionally, OmniVision’s split-pixel LFM technology with four captures provides the best performance over the entire automotive temperature range, claims the company. The OX03C10 is also the first viewing image sensor with HDR and LFM that can deliver 1920x1280p resolution at a frame rate of 60 frames per second, enabling faster camera view switching for drivers. The power consumption of the OX03C10 is 25 per cent lower than that of the nearest 2.5MP LFM image sensor, claims OmniVision and it has the industry’s smallest package size. As a result, cameras can continuously run at 60 frames per second and be placed in even the tightest spaces.

OmniVision’s PureCel Plus-S stacked architecture enables pixel performance advantages in the OX03C10 over non-stacked technology, in addition to a smaller die and lower power consumption. For example, 3D stacking allows OmniVision to boost pixel and dark current performance, resulting in a 20 per cent improvement in the signal-to-noise ratio (SNR) over the prior generation of its 2.5MP automotive viewing sensors.