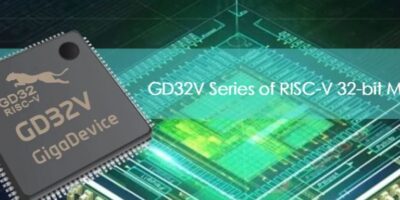 The first product line in the family is the GD32VF103 series RISC-V MCU. It is designed for mainstream development, says GigaDevice. There are 14 models, including QFN36, LQFP48, LQFP64 and LQFP100, compatible with existing GD32 MCUs in software development and pin packaging.

The core is designed with a two-stage variable-length pipeline microarchitecture with a streamlined dynamic branch predictor and instruction pre-fetch unit. The performance and frequency of the traditional architecture three-stage pipeline can be achieved at the cost of the two-stage pipeline, achieving industry-leading energy efficiency and cost advantages, claims GigaDevice.

The GD32VF103 series RISC-V MCUs provide a processing frequency of 108MHz, 16kbyte to 128kbyte of on-chip flash and 6 to 32kbyte of SRAM cache, equipped with the gFlash patented technology, which supports high-speed core accesses to flash in zero wait time. The core also includes a single-cycle hardware multiplier, hardware divider and acceleration unit for advanced computing and data processing challenges.

The chip is powered by 2.6 to 3.6V and the I/O ports can withstand 5V voltage level. It is equipped with a 16-bit advanced timer supporting three-phase PWM complementary outputs and Hall acquisition interface for vector control. It also has up to four 16-bit general-purpose timers, two 16-bit basic timers, and two multi-channel DMA controllers. The interrupt controller (ECLIC) provides up to 68 external interrupts and can be nested with 16 programmable priority levels to enhance the real-time performance of high-performance control.

Peripheral resources include up to three USART, two UART, three SPI, two I2C, two I2S, two CAN2.0B, one USB 2.0 FS OTG and an External Bus Expansion Controller (EXMC). The I2C interface supports Fast Plus (Fm+) mode with frequencies up to 1MHz (1Mbits per second), which is two times faster than the previous speed, says GigaDevice. The SPI also supports four-wire system and more transmission modes, including the easy expansion to Quad SPI for high-speed NOR Flash accesses. The USB 2.0 FS OTG interface provides multiple modes such as device, host, and OTG, while the EXMC connects to external memory such as NOR Flash and SRAM.

The GD32VF103 series RISC-V MCUs also integrate two 12-bit high-speed ADCs with sampling rates up to 2.6Msamples per second, provides up to 16 reusable channels, supports 16-bit hardware oversampling filtering and resolution configurability and it has two 12-bit DAC. Up to 80 per cent of GPIOs have optional features and support port remapping.